ByrneWallace ranked as a leading legal advisor to the PRS market 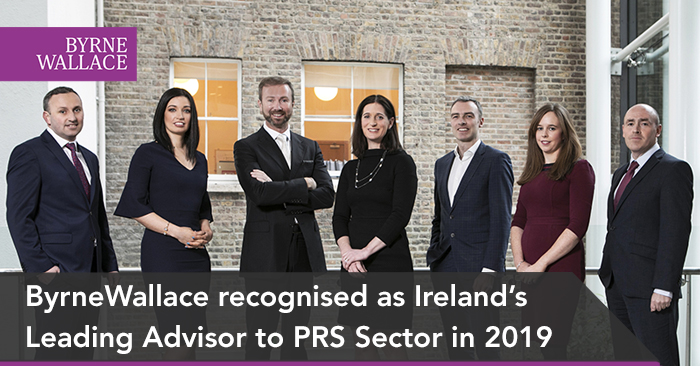 ByrneWallace continues to be recognised as one of Ireland’s leading law firms in the Private Rented Sector (“PRS”)/Build-to-Rent Sector arising from a review of a recently published report.

The firm advised both buyers and sellers in 12 out of the top 45 transactions in Ireland for 2019.This includes the purchase of circa 600 residential and commercial assets for €150 million by European property firm, LRC Group which is regarded as one of the largest PRS investment transactions for 2019.

The Report entitled “The Dublin Private Rented Sector Investment Report Q4 2019”, was published by Hooke & MacDonald in January 2020, and reviews the previous calendar year highlighting continued significant activity in the PRS sector in Ireland. In the relevant period, the number of units transacted in deals on which ByrneWallace advised was 1,334, with a cumulative value of in excess of €416 million. The firm has one of the largest property groups of any law firms in Dublin with a team of seven partners and over twenty additional solicitors.

Commenting on the findings of the Report, ByrneWallace Head of Property Michael Walsh said: “Building on momentum gained over many years, we continued our focus on the PRS in 2019, acting for a mix of institutional clients and developers. We are proud to have acted on so many market leading transactions and this remains a key area of growth for us. ByrneWallace excels on mandates with multiple strands – our banking, property and construction teams work seamlessly on projects such as these. This work is quite separate to that of our New Homes Division which completed over 500 individual new homes sales last year, a modest increase from 2018 reflecting a relatively soft new homes market”.