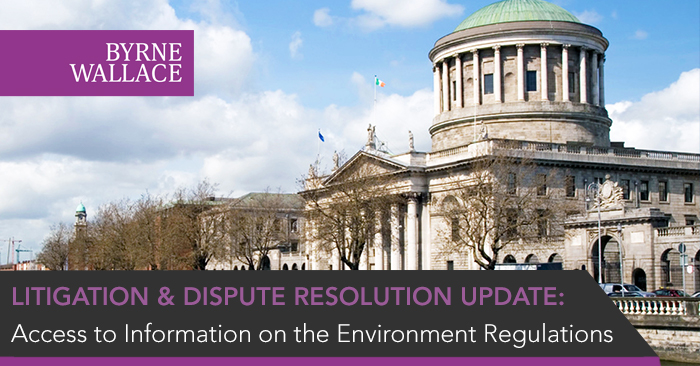 Mr. Justice Owens delivered judgment on 25 January 2021 in Right to Know CLG v Commissioner for Environmental Information and Raheenleagh Power DAC [2021] IEHC 46. The High Court overturned the decision of the Commissioner for Environmental Information that the notice party, Raheenleagh Power DAC (RP), was not a “public authority” for the purposes of Article 3(1) of the European Communities (Access to Information on the Environment) Regulations 2007 (the Regulations). The Regulations transpose Directive 2003/4/EC (the Directive) which concerns the rights of access to individuals to environmental information held by public authorities.

RP is a joint venture company which operates a wind farm in the Wicklow Mountains. At the relevant time, RP’s shares were divided equally between Coillte and an ESB subsidiary. RP was given a licence to generate electricity and authorisation to construct the wind farm pursuant to the Electricity Regulation Act 1999. The 1999 Act removed the ESB monopoly on the generation and supply of electricity and includes provisions which promote competition and development of electricity generation using sources of renewable energy.

In May 2017, the appellant, Right to Know CLG, asked RP for data relating to wind turbine noise which supported information provided in the application for planning permission for the wind farm. RP refused the request on the basis that it was not a “public authority”. The refusal was appealed to the Commissioner in July 2017.

The Commissioner for Environmental Information

(b) any natural or legal person performing public administrative functions under national law, including specific duties, activities or services in relation to the environment, and

(c) any natural or legal person having public responsibilities or functions, or providing public services, relating to the environment under the control of a body or person falling within paragraph (a) or (b)…”

The Commissioner concluded that RP was not a “public authority” within either Article 2(2)(b) or Article 2(2)(c) and Right to Know appealed the decision to the High Court.

The Commissioner’s first finding was that RP was not a “public authority” pursuant to Article 2(2)(b). He relied on the CJEU decision in Case C-279/12 Fish Legal and Shirley for guidance on the meaning and effect of Article 2(2)(b). The CJEU determined that Article 2(2)(b) related to entities “entrusted” with the performance of services of public interest and which are “vested with special powers beyond those which result from the normal rules applicable in relations between persons governed by private law.”

The Commissioner found that RP was one of hundreds of generators of electricity in Ireland and concluded that the 1999 Act did not confer powers on RP which were “special” – within the meaning of Fish Legal and Shirley – on the basis that powers contained in the 1999 Act were the regulator’s powers or powers which could only be exercised with the consent of the regulator.

The Court determined that the Commissioner did not give sufficient consideration to the purpose and functional effect of RP’s “powers”. The Court noted that the test in Fish Legal and Shirley required an examination of any relationship between performance of services of public interest which an entity may be “entrusted” with under national legislation and the public law powers which enable it to perform those services. Furthermore, the Fish Legal and Shirley test did not require that the public entrustment be a monopoly or that “special powers” accompanying that entrustment be granted exclusively to a single entity or a small number of entities.

The Court found that, unlike RP, entities governed by private law have no right of access to valuable State infrastructure or to supply electricity which authorisation under the 1999 Act provides. Again, unlike RP, they also have no right of compulsory acquisition for private or commercial purposes. Holders of authorisations under the 1999 Act such as RP are entrusted by public law with rights and responsibilities and they are given “special powers” in that context.

In relation to Article 2(2)(c), the Commissioner proposed to approach the test by an examination of three issues in successive stages:

(i) whether RP was a body which has “public responsibilities or functions” or provides “public services”;

(ii) whether such responsibilities, functions or services relate “to the environment”; and

The Commissioner concluded that RP did not have “public responsibilities or functions” or provide “public services” and therefore did not consider the second and third stages of the proposed test. The Commissioner reasoned that the provision by RP of electricity as a generator was not a “public service” and did not involve RP having “public responsibilities or functions”. This was on the basis that electricity was being provided by a number of producers in a commercial market.

The Court determined that the fact that a number of authorisations and generation licenses had been given out under the 1999 Act was irrelevant to the test under Article 2(2)(c). Instead the Article 2(2)(c) test was a composite one. The question of whether a responsibility or function or service is “public” must be examined in context. A relationship must exist between the public responsibility, function or service and the environment. The Court agreed with Right to Know’s argument that generator construction and electricity generation for the national grid under the 1999 Act regime involves public responsibilities, functions or services relating to the environment.

The Court in turn went on to consider the issue of “control” of RP. The Court determined that Coillte and ESB are public authorities within Article 2(2)(a) or Article 2(2)(b) of the Directive and that at the time the information was sought by Right to Know in 2017, each of these two entities, either acting together or alone, was in a position to exert decisive influence on the actions of RP.

The Court also addressed the question of whether it made a difference that Coillte was replaced by a private operator, GR Wind Farms 1 Ltd, in RP in 2018. As RP is a venture under joint control, each of the two controllers is in a position to exert decisive influence on RP. The Court concluded that as the ESB holds half of the issued shares through a subsidiary company and provides day-to-day management for RP, RP is “under the control of” the ESB which is a “public authority” pursuant to Article 2(2)(a) or Article 2(2)(b) of the Directive.

Mr. Justice Owens’ judgment is a welcome addition to the developing body of case law relating to access to information on the environment and provides useful guidance on what constitutes a “public authority”. This can be a complex question in the case of joint ventures involving private and State entities. ByrneWallace LLP is experienced in this area and is currently acting for a public authority in a preliminary reference to the CJEU on an aspect of the Regulations.