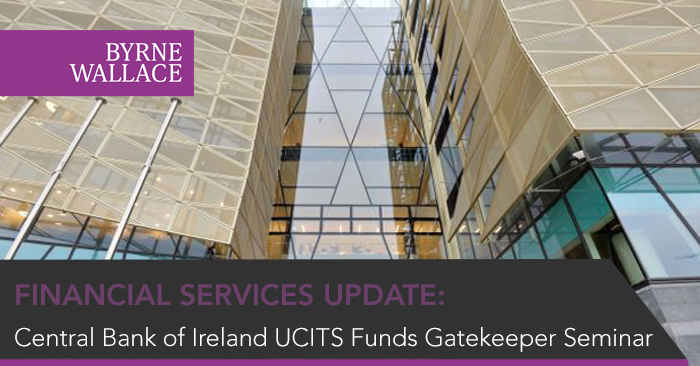 On the 3 March, the Central Bank of Ireland (“CBI”) convened its first sectoral engagement meeting of 2020 with the Irish Funds Industry by way of a workshop at North Wall Quay. The workshop focused on the CBI’s authorisation and supervision framework for UCITS funds. Indeed, within that context, there was an emphasis on working through industry concerns regarding the smooth functioning of the authorisation process and scrutiny by the CBI as supervisor of corporate governance and portfolio composition.

Colm Kincaid, Director of Wholesale Markets at the CBI, opened the workshop by highlighting the scale of the UCITS funds industry in Ireland with the following points:

Mr Kincaid noted that the key to the success of the UCITS model is its widespread acceptance and confidence by consumers having regard to the hard-wired requirements in the UCITS Directives on portfolio diversification, liquidity, and leverage. He added that those features had been demonstrably successful over many decades, including during stressed economic scenarios.

Patricia Dunne, Head of Funds Authorisation Division at the CBI outlined the CBI’s Gatekeeper Principles having regard to authorisation and supervision of UCITS and she noted the following points:

Sonia Weafer, Head of Function - Securities and Markets Supervision, noted that as supervisor the CBI's primary role is to prevent harm to investors and this objective is pursued at the authorisation and supervisory stages. She noted that the first of defence in safeguarding investors rests with the fund directors, the UCITS management company and the third party service providers.

In instances where the CBI detects failures in first line supervision by the fund related parties, the CBI will consider appropriate action in the interests of investors.

Rosemary Hanna, Head of Function - Securities and Markets Supervision, outlined the CBI’s modified application process for UCITS, whereby 98% of UCITS applications operate on an enhanced efficiency basis. She gave as an example the self-certification elements of this process of the terms of appointment of depositaries, with occasional spot-check reviews.

She highlighted the necessity for enhanced scrutiny in a relatively small number of cases having regard to perimeter concerns around proposed investment strategies and their substantive compliance with the UCITS requirements, making the point that it is the primary responsibility of the fund board and the third party delegates to ensure substantive compliance.

She noted two examples of instances that raised questions by the CBI in the course of its pre-authorisation scrutiny in the interests of investors:

In the limited number of cases where the CBI adopts an approach of enhanced scrutiny, Ms Hanna noted that the issues that the CBI will likely focus on will include:

1. Fiduciary obligations of the board of the fund

The board of a fund is required to make deliberate decisions in relation the establishment of the fund, its investment objective and policies, and appointment of third party delegates. The CBI will be looking to fund board to demonstrate effective decision making in relation to such matters and that the CBI expects that the fund board is in place prior to making the application for authorisation by the CBI.

2. Board packs and minutes

The CBI may review proceedings of fund boards, including a comparison between draft minutes and finalised minutes to consider the deliberation undertaken by the fund board in relation to the fund’s business.

3. Securities and asset types in the interests of retail investors

In the case of daily dealing funds, the CBI would have a concern in a specific number of cases that portfolio composition (comprising e.g. exchange traded CFDs, and illiquid CLOs etc.) would meet the leverage and liquidity requirements of a daily dealing UCITS, bearing in mind that the CBI accepts that what might not be suitable in the interests of a retail investment product for sale to a retail investor might well be acceptable in the context of a fund portfolio.

4. Due Diligence undertaken on Service Providers

The CBI has noted a number of instances where it considers that un-regulated investment advisers have exceeded their mandates and this has called into question the governance of such relevant funds. The consideration undertaken by the respective boards in the appointment and delegation of the investment management function will be subject to review.

Patricia Dunne, Head of Funds Authorisation and Supervision, made the closing remarks that the CBI will look in the first instance to the board of the fund and its delegates to demonstrate substantive compliance with the UCITS requirements  and would encourage funds and their boards to engage pro-actively with the CBI regarding necessary modifications in the interests of retail investors.

Ms Dunne noted that the CBI proposes to engage with Irish Funds throughout the year with a series of further workshops with the next one likely to focus on QIAIFs.

For further information on our services in this area, please contact Joe Gavin or Damien McShane.