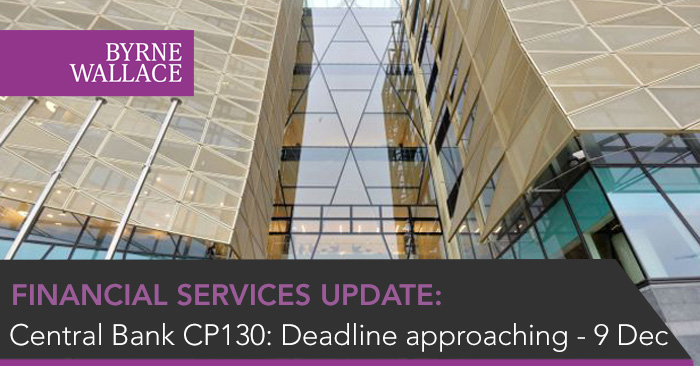 The Central Bank of Ireland has initiated a public consultation process regarding the suitability of standards applying to breaches and errors taking place with respect to Irish Collective Investment Schemes and their managers.

The consultation process, which is outlined in the Central Bank’s Consultation Paper 130 (“CP130”) document entitled “Treatment, correction, and redress of errors in investment funds”, was launched on  9 September 2019, and the deadline for interested parties to submit any response they wish to have considered is Monday, 9 December 2019.

Existing expectations, set out in industry guidance, have never before been put on an official footing, and the IMF’s 2014 review of Ireland recommended that official standards be developed.

This consultation marks the beginning of a two-part process designed to see the implementation of formal Central Bank rules and/or guidance, and it involves the Central Bank both proposing various standards and seeking responses to a series of questions for reviewers to address in any response. A further consultation paper, and response period, is expected prior to revised rules being made, likely effective in late 2020.

Although the Central Bank has not, at this stage, provided an account of what revised standards will require, CP130 outlines that the following matters are under consideration:

A step in the right direction? Potential impact for the future of the industry.

This consultation represents a welcome and considered development from the Central Bank, in terms of trying to act on a recommendation from the IMF and seeking to ensure that the local industry is at the forefront of international best practice. At the same time the Central Bank is, rightly, seeking to ensure that any changes to existing industry practice are evaluated and understood, with alterations proposed where they have a justifiable basis and their impact has been factored into decision making.

While the Central Bank should be commended for not shying away from considering some difficult issues, certain of what is proposed, or at least consulted upon, may prove counterproductive in its effects, or at least should only be introduced EU-wide, or in the form of  IOSCO-led standards. For example, mandatory reporting to investors in the case of any material error occurring – irrespective of whether or not the investor is affected, , may result in irrelevant and necessarily negative notifications being issued. This could result in  significant costs and reputational exposures placed on Irish funds unlike those in peer jurisdictions, resulting in real detriment for the local industry for no discernible gain.

The final form of the Central Bank’s revised standards remains to be seen - including whether or not these will address long standing questions such advertency in the case of funds “managed to the breach”, and whether or not the performance of a likely substitute/alternative investment can be considered in the context of compensation owed as a result of an Investment Breach Error. No doubt points of principle such as extra-territoriality, which fund services providers will have primary responsibly for classifying and reporting breaches and errors; as well as more minor issues such as definitional terms and timelines will be flagged in industry responses to the Consultation Paper and will need to be considered further by Central Bank policymakers.  Further, whether final standards will be in the form of rules, guidance, or both; has not been determined – and the prospect of a further consultation has been referenced in CP130.

To that end, it’s very much too early to pass comment on what the ultimate effect of this exercise may have. However, at this stage, it appears as though the approach to be followed is welcome and the industry, together with other stakeholders, will have the chance to have their positions considered prior to final rules being made.

Next Steps – how to make a submission

The Consultation document poses a number of key questions and interested parties are invited to respond to these before  Monday, December, 9 2019 by emailing a response in Word format to fundspolicy@centralbank.ie  clearly labelled “Consultation Paper 130: Treatment, Correction and Redress of Investment Fund Errors.”

The Central Bank intends to publish all written contributions submitted, with a feedback statement to follow in the normal course of events.

To read the Consultation Paper in full, click here [link to https://www.centralbank.ie/docs/default-source/publications/consultation-papers/cp130/cp130-treatment-correction-and-redress-of-errors-in-investment-funds.pdf?sfvrsn=5 ]

For further information on the consultation process, or for advice on investment funds contact Damien McShane or Joe Gavin from the ByrneWallace Financial Services team.