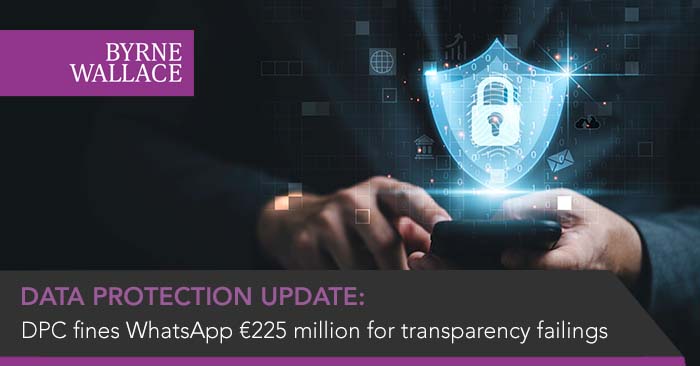 The DPC found that WhatsApp had breached Articles 5, 12, 13 and 14 of the GDPR concerning transparency in processing and provision of information to data subjects – both users and non-users of its service. The DPC’s decision emphasises the seriousness of infringements whereby (i) insufficient information was provided on data sharing by WhatsApp with its parent company, Facebook Inc; and (ii) where non-users of the service (whose personal data was processed by WhatsApp where users shared their contact lists) were not presented with a privacy notice at all.

In addition to the fine, the DPC exercised two further corrective powers in issuing both a reprimand to WhatsApp and an order that WhatsApp bring its processing operations (i.e. amend its privacy notice to data subjects) into compliance with the GDPR within three months.

Background to the Decision: One-Stop Shop and Consistency Mechanisms

The fine is more than quadruple the fine of €30-50 million originally proposed by the DPC in the draft decision (as lead supervisory authority under the GDPR’s ‘one-stop shop’ mechanism) circulated to other concerned supervisory authorities (CSAs) in December 2020. The significant increase reflects interventions made by eight of the CSAs and referral of the resulting dispute for binding decision to the European Data Protection Board (EDPB) under the GDPR’s consistency mechanism.

The EDPB issued its binding decision in July and the resulting final decision of the DPC followed in late August. Both decisions provide valuable guidance on information provision/transparency obligations under the GDPR towards data subjects and the manner in which administrative fines are calculated:

In addition to the financial risks of enforcement actions, there is also the prospect of reputational damage and negative publicity for any company which does not have a compliant privacy notice in place. Organisations that fail to comply with enforcement actions from the DPC may find details of their non-compliance published in the next annual report of the DPC.

Where an organisation does not have the required data protection infrastructure in place, dealing with regulatory investigations and inquiries can also be both costly and time consuming (the WhatsApp investigation was ongoing for a period of three years) and can also negatively impact upon future valuations of the business in corporate transactions.