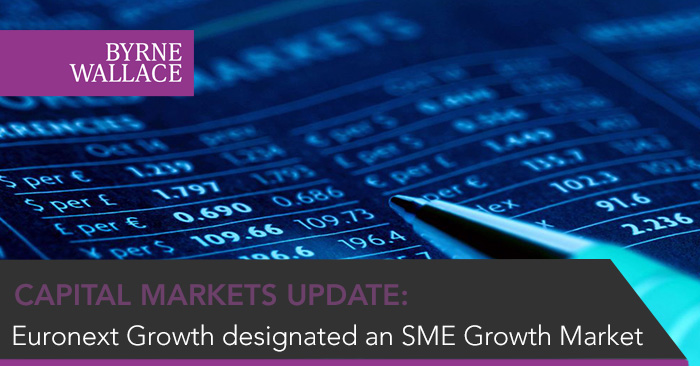 On 29 October 2019 Euronext announced that Euronext Growth, its pan-European multilateral trading facility (“MTF”) dedicated to small & mid-capitalized companies, has been officially registered as "SME Growth Market" for both shares and bonds by the competent authorities in Ireland, Belgium, France, and Portugal.

The designation follows similar designations of London’s NEX Exchange Growth Market and AIM, which bear many similarities to Euronext Growth, in being designated an SME Growth Market.

The status has been designed to facilitate access to capital markets for European SME’s by developing qualified markets to cater for the specific needs of SMEs. Designation as an SME Growth Market allows Euronext Growth issuers and applicants to benefit from reduced administrative requirements under the Prospectus Regulation and the Market Abuse Regulation, thus reducing the administrative burden placed on SMEs when listing or issuing equity and bonds with the aim to increase liquidity on SME Growth Markets.

What is an SME Growth Market?

What is an SME?

(a) If its shares have been admitted to trading less than one year - the closing share price on the first day of trading;

(b) If its shares have been admitted to trading for more than one year but less than two years - the last closing share price of the first day of trading; or

(c) If its shares have been admitted to trading for more than two years but less than three years - the average of the last closing share prices of each of the first two years of trading.

As of 11 October 2019, by virtue of Delegated Regulation (EU) 2019/1011, an issuer that has no equity instrument traded on any trading venue shall be deemed an SME for the purposes of Article 4(1)(13) of Directive 2014/65/EU if the nominal value of its debt issuances over the previous calendar year, on all trading venues across the Union, does not exceed EUR 50 million