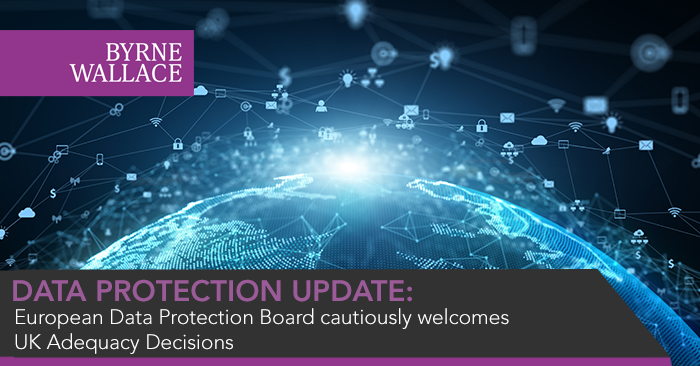 The European Data Protection Board (the EDPB) adopted two opinions last month on the draft adequacy decisions on personal data transfers to the UK published by the European Commission in February.

These opinions and the draft adequacy decisions concern the continued free flow of data under the General Data Protection Regulation (the GDPR) and the Law Enforcement Directive between member states of the European Economic Area (the EEA) and the United Kingdom (UK), now that the UK is no longer a member state of the European Union.

The GDPR places additional obligations on personal data transfers to countries outside the EEA which are designated ‘third countries’ under the GDPR. Transfers to third countries require additional safeguards to be implemented, such as ‘Standard Contractual Clauses’ (model clauses approved by the European Commission), but this requirement will not apply to the UK if the adequacy decisions are adopted.

Personal data transfers to the UK have, since 1 January 2021, relied upon a bridging measure in the UK-EU Trade and Cooperation Agreement for the adequacy decisions to be implemented, which expires at the end of June this year (see our earlier report on this 'bridge').

The EDPB is comprised of the data protection supervisory authorities across all member states of the EEA. Its opinions are non-binding but highly influential.

The EDPB concluded, due to the fact that its data protection framework in the UK is largely based on the data protection framework of the European Union, e.g. the GDPR and the Law Enforcement Directive, the UK is in a unique position compared to other third countries. Core concepts and provisions are common to the legal framework in each regime and so the EDPB concluded that, in many aspects, the level of protection of personal data in the UK to be “essentially equivalent” to that found under European law.

Areas of concern and further consideration by the European Commission

The EDPB caveated its conclusions by identifying a number of challenges now and in the future to grounding the adoption by the European Commission of the adequacy decisions:

What next for the Adequacy Decisions?

In order for personal data flows to the UK to enjoy a smooth transition from the bridging mechanism to an adequacy decision, this will require the above steps to be completed before the 30 June 2021 deadline, which could prove challenging.

If adopted, the adequacy decisions will be valid for four years and may be subject to interim periodic reviews and monitoring by the European Commission should the data protection regime in the UK begin to diverge.

Next steps for your business

In order to ensure no interruption to personal data flows with the UK should the adequacy decision not be adopted in time or at all (or if the adequacy is granted but later revoked), businesses can look to implement other appropriate safeguards as recognised transfer mechanisms.