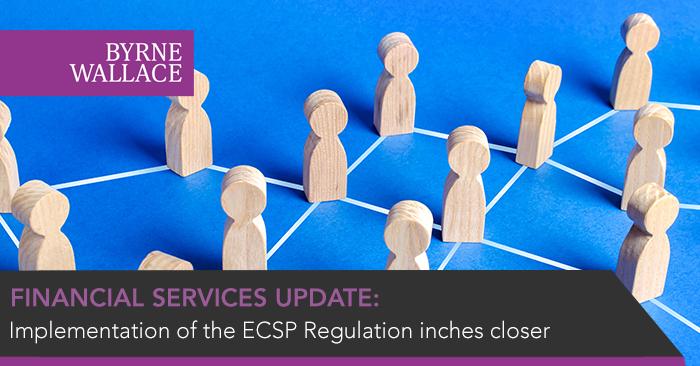 The EU’s flagship regulatory regime for regulating crowdfunding within its territory – the European Crowdfunding Service Providers Regulation (Regulation (EU) 2020/1503) (the ECSP Regulation), and associated requirements, are due to enter into effect on 10 November 2021, and promise a sea change in the approach the bloc has taken to regulating crowdsourcing to date. Moving from a patchwork of local regimes which can be summarised as (i) variants of those which apply to securities trading / lending, (ii) innovative approaches sympathetic to the sector, and (iii) non-engagement; the new EU regime seeks to implement a tailor-made regime. Indeed, the regime is one which sees a large part of what has come to be considered “crowdsourcing” become regulated through an approach which is considerably “lighter” than that which applies to many other investment / non-bank lending services, but requires operators to adhere with requirements familiar in other sectors, including prudential and conduct of business rules. A key consultation regarding what regulated crowdfunding platforms will be required to adhere to is due to come to an end on 28 May 2021; and thereafter, interested parties can expect technical standards to be finalised and turned into formal rules, albeit much remains to be done in terms of the finer details of the proposed regulatory regime.

In this paper we give a short overview of what the ECSP Regulation does in terms of implementing new requirements, what matters the consultation relates to, and what to expect in terms of next steps and implementation.

On 20 October 2020, the ECSP Regulation and an accompany amendment to the MiFID regime were published in the Official Journal of the European Union, entering into effect some 20 days later, in the culmination of an effort going nearly as far back as the European Commission’s March 2018 FinTech Action Plan, with previous initiatives mooted prior to then. By seeking to regulate crowdfunding service providers the EU sought to address an assortment of varying national regimes – Ireland, for example, had signalled it would implement specific rules in 2019 but did not proceed to do so – while protecting European investors and strengthening the single market in financial services.

In doing so, EU decision makers did not seek to regulate all types of crowdfunding, but rather those operating platforms which relate to either:

Where either of these activities are to be performed (and there are a range of exemptions, as well as associated regulatory regimes, such as PSD2 which may also be relevant), authorisation by an EU Competent Authority (expected to be the Central Bank in the case of Ireland) will likely be required from November 2021 (or November 2022 where “grandfathered”) onwards, whilst providers of other types of crowdfunding platforms (e.g. peer-to-peer lending) will not be within scope.

A number of minimum standards must be met by an applicant to allow them secure authorisation – including the provision of information regarding their programme of operations, business plan, internal controls, management, etc.; while the management of the process by regulatory authorities is also prescribed – e.g. they must review an application and advise if it is complete within 25 working days of receipt.

Where authorised, a crowdfunding platform has the advantage of being able to provide its services across the EU and cannot be required to establish a permanent presence in any EU member state beyond that within which it is authorised.

Importantly, when authorised, crowdsourcing service providers will be subject to the general provisions of Financial Services Legislation which applies in Ireland, including the Fitness & Probity process, the Central Bank’s ASP regime, regulatory levies, etc. That being the case, investors can be sure that regulated crowdfunding platforms will be subject to stringent oversight and, while no guarantee, the risk of some of the issues which arose in the early days of the sector representing will be mitigated.

What does the consultation relate to?

The ECSP Regulation requires ESMA and the EBA to develop draft technical standards in 12 areas, which the European Commission may then turn into effective rules using specified law-making powers. In the consultation, ESMA has consulted on draft requirements concerning the following (in terms of crowdsourcing providers):

ESMA outlines draft rules (in the form of technical standards, to be implemented as a legal instrument) in its consultation paper, as well as an analysis as to why relevant requirements are proposed and questions on each. The proposed requirements concerned are not insignificant and, if implemented, would impose real obligations on in-scope firms, such as the proposed online calculation tool to be used to simulate ability to bear losses on the part of non-sophisticated investors. Depending on the outcome of the consultation process the relevant European supervisory authorities can be expected to proceed to submit relevant drafts to the European Commission for adoption as formal regulations binding on all parties subject to the ECSP Regulation.

Assessment and next steps

While much is to be welcomed in ESMA’s proposals, and the final form of relevant rules is not yet clear, some of what is proposed will prove problematic and costly for some players. This is of particular concern in what has been a dynamic and innovative sector which has proven very valuable for investors and capital raisers alike, particularly in light of complaints of opaqueness and unjustifiable fees within highly intermediated parts of the broader financial sector. To the extent that relevant rules are not sufficiently mindful of the need for variation in requirements with regards to the varying nature, scale, and complexity of providers, poorly considered requirements may serve to stifle innovation or drive it activity off-shore. That being the case, much of what is proposed is well considered and should be effective in achieving the objectives of policy-makers in a rapidly maturing sector.

After the conclusion of the consultation process, ESMA can be expected to report back on the outcome and potentially amend its proposed requirements prior to their being required to be submitted to the Commission by 10 November 2021; and both ESMA and the EBA have further work to complete by May 2022. The Commission can be expected to introduce formal regulations using the prescribed process shortly thereafter, as the regime becomes embedded and regulators begin to operate it.

Ireland has already begun the process of implementing relevant requirements here, with S.I. No. 203 of 2021 (the European Union (Markets in Financial Instruments) (Amendment) Regulations 2021) recently published (albeit not yet in effect), and a range of further laws, regulations and provisions designed to give effect to the ECSP Regulation are to be published in the coming months.

How can ByrneWallace LLP help?

ByrneWallace LLP are experienced in helping crowdfunding platforms, investors, service-providers and other stakeholders in facilitating establishment, operationalisation, and trading activity as well as assisting a wide variety of firms successfully achieve authorisation under various regulatory regimes. ByrneWallace LLP’s multi-disciplinary team including Corporate, Banking and Finance, and Taxation have experience in managing all aspects of crowdfunding and would be happy assisting, whether you are an experienced market participant, an investor seeking to operate in the space or any other stakeholder interested in this area.