VIEW ALL
Publications & Insights Ireland and Apple succeed at EU Court, but are death and taxes still certain?
Share This

Ireland and Apple succeed at EU Court, but are death and taxes still certain? 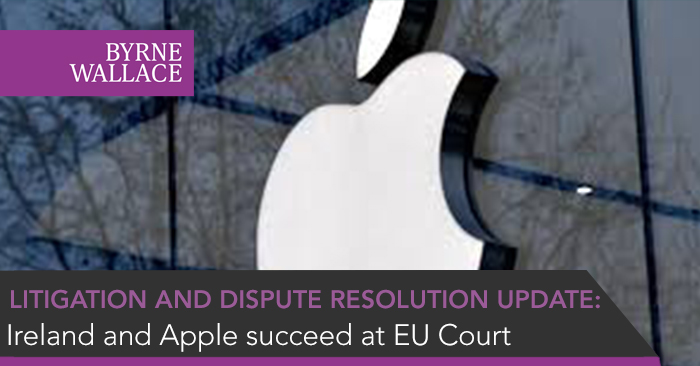 Yesterday the EU’s General Court annulled the 2016 European Commission decision which ordered Apple to pay Ireland €13 billion in illegal State aid, and affirms (albeit with some trepidation) Ireland’s historical tax treatment of Apple. While the outcome provides some certainty in taxes for Ireland and Apple, it may be the death of the European Commission’s pursuit of illegal State aid in tax rulings (to coin a phrase).

The case centred around two tax rulings issued by the Revenue Commissioners in 1991 and 2007 in favour of two Apple companies incorporated (but not tax resident) in Ireland, which were used by Apple to calculate its chargeable profits. Tax rulings are essentially an advance opinion given by tax authorities and relied on by companies to explain the application of tax rules in individual cases. They are used to confirm transfer pricing arrangements between different parts of the same group of companies. Tax rulings are not inherently problematic under EU State aid rules, but cause issues where they confer a selective advantage to a specific company or groups of companies.

The European Commission’s highly publicised 2016 decision (see our previous bulletin available here) concluded that the two Irish tax rulings on transfer pricing arrangements within the Apple group amounted to granting a total of over €13 billion in unlawful tax advantages over other business contrary to EU State aid rules. A memorable claim made by the Commission was that this meant Apple paid an effective tax rate of €50 per €1,000,000 of profit during the period under assessment.

In its judgment, the General Court concluded that the European Commission’s decision did not succeed in showing that Ireland conferred an economic advantage on a selective basis to Apple through its tax rulings for the purposes of the EU State aid rules. In particular, the court found that the Commission incorrectly concluded that the Revenue Commissioners granted Apple an economic advantage because it failed to show that its income in Ireland represented the value of activities carried out by the two Apple companies in Ireland.

Although the Court noted that the Irish tax rulings were “incomplete” and “occasionally inconsistent”, it concluded that the defects identified by the Commission in those rulings did not establish that there was an advantage for the purposes of State aid law. Bearing in mind the fundamental principle that tax rule changes tend not to apply retroactively, the judgment finally gives certainty on the tax rulings made in favour of Apple.

2. Is this the death of the Commission’s State aid and tax planning policy?

Yesterday’s Apple judgment is another significant chapter in the Commission’s pursuit of what it perceives as aggressive tax planning measures using the State aid rules. In September 2019, the General Court gave its judgment on two similar (but smaller) cases and appeared to endorse the Commission’s approach of challenging so-called “transfer pricing” arrangements between tax authorities and companies.

In the Fiat (Luxembourg) case, the Court endorsed the Commission’s finding and ordered Fiat to repay money to Luxembourg. However, in the Starbucks (Netherlands) case the Court annulled the Commission’s decision and concluded that the Commission faces a significant burden in proving the existence of an advantage and illegal State aid in tax ruling cases, including by justifying its choice of methodology.

Fiscal policy largely remains the exclusive competence of EU Member States, particularly in the area of taxation. This is one of the reasons why successful interference by the Commission using State aid rules has proven particularly difficulty to date. Judgments in other tax ruling cases involving Amazon and Engie (both Luxembourg) are still pending before the Court.

Any further successes for the Commission in the tax ruling sphere will be hard-fought and enforcement in this specific area may slowly die away.  However, it is foreseeable that the Commission’s principles on  fair competition could be reincarnated in some form of EU-wide ex-ante tax harmonisation.

The alleged aid amount of €13 billion (plus the accruing interest) remains in an escrow account while the Commission considers whether to appeal the judgment to the Court of Justice. The judgment can be appealed on a point of law for two months from the date of the General Court’s judgment.

In the meantime, Apple remains very much on the Commission’s radar, the Commission having launched a (very separate and likely very lengthy) antitrust investigation into Apple’s App Store and Apple Pay services in June.