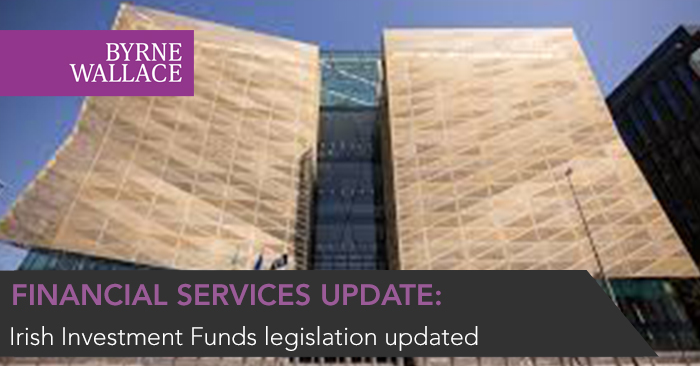 Both sets of regulations were introduced using the Minister’s powers under the European Communities Act and mark a fairly routine updating of key elements of Irish investment funds legislation. In this case the amending regulations were to take into account the changes implemented by updates to the MiFID regime and its transposition in the State, as well as updates to UCITS and AIF requirements at EU level.1 Amongst other changes, the revised rules tie fund managers into the local investor monies rules, and bolster the powers of the Central Bank of Ireland (“Central Bank”) in terms of the redemption/repurchase of shares or units in AIFs in certain circumstances.

One development, not anticipated was the extension, seemingly, of protections afforded to securities held for investment funds regulated as AIFs and UCITS to cash assets of those funds. In the past securities could not be available for distribution of the creditors of a depositary or its delegate in the event of the solvency of either. This remains the case, but with the new regulations this protection has been extended to cash assets held by a depositary or delegate of the depositary located in the EU/EEA. Reflected in changes to both Regulation 22 of the AIFM Regulations and Regulation 37 (and 33) of the UCITS Regulations, the relevant amendments have yet to be subject to any regulatory or court scrutiny. However they may require significant changes to the manner in which certain depositaries deposit or hold client cash or see the depositary face a significant litigation risk in the event of loss of client cash assets due in the event of insolvency.

What is the issue?

Practices for holding cash of an Irish AIF or UCITS can differ depending on the legal form and structure of a depositary (e.g. Irish credit institution, EU credit institution passporting into the Ireland, Irish “IIA" firm, etc.), as well as the nature of the investment fund itself.

In each case a credit institution will hold cash as "banker" on its balance sheet with all other cash balances, and therefore the UCITS or AIF client will be exposed to risk of loss in the event that the credit institution has insufficient assets to repay full credit balances on its insolvency. Contrary to what the Irish UCITS Regulations and AIF Regulations now state, other than in very specific circumstances, cash balances will be available for distribution among or realisation for the benefit of, creditors of the depositary or holding credit institution, whichever is acting as “banker”.

Should the changes in the UCITS Regulations and AIFM Regulations detailed above be read literally, the existing practice of credit institutions holding cash “as banker” (either as depositary themselves or on the order of depositaries) would be called into question - at least insofar as depositary credit institutions located in the EU are concerned. Unless the credit institution (either itself, where depositary, or in some arrangement with a depositary depositing cash on behalf of its client) to hold relevant balances on trust or use some other device to prevent cash balances of Irish AIFs and UCITS being treated in the same way as all other general creditors, a breach of the UCITS Regulations and/or AIFM Regulations may arise. Aside from regulatory compliance concerns and potential enforcement action, a depositary which permits cash being held "as banker" by an EU credit institution may stand exposed to potential liability in the event that a client AIF or UCITS loses cash balances for negligence, breach of duty (including statutory duty) and potentially further claims.

Whilst the provisions for strict liability in the event of loss of financial instruments have not been amended in either the UCITS Regulations or AIFM Regulations and do not extend to loss of cash assets, relevant regulations provide that depositaries are liable to client funds and their share/unit holders for all other losses suffered by them as a result of the depositary's negligent or intentional failure to properly fulfil its obligations under either set of regulations. Further, as with all regulated financial services providers, the Central Bank Acts 1942 to 2018 provide that a failure by a depositary to comply with any obligation under financial services legislation (which includes the AIFM Regulations and UCITS Regulations) is actionable by any customer of the depositary who suffers loss or damage as a result of such failure.

Firms subject to relevant provisions of the AIFM Regulations and UCITS Regulations such as management companies, investment managers, and depositaries, should have regard to amendments in both sets of Regulations and ensure that, where their operations are affected, they are reconsidered in light of the revised requirements.

For further information, or for advice on relevant matters, contact Joe Gavin or Damien McShane in the ByrneWallace Financial Services team.