VIEW ALL
Publications & Insights Landlords: Look before you leap
Share This

Landlords: Look before you leap 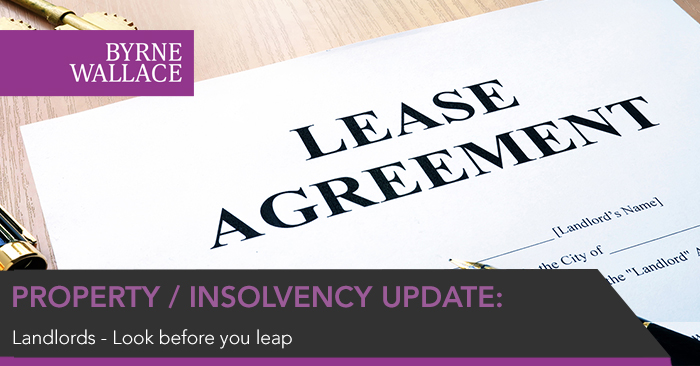 Where an insolvent tenant or tenant’s liquidator offers to surrender its lease to the landlord, it will normally make sense for the landlord to “cut its losses” by accepting the surrender and seeking a new tenant.  Even if there is a lack of demand in the market, the landlord should consider whether it is realistic to try to achieve a greater return by refusing to accept the surrender of the lease or imposing conditions for acceptance of the surrender. This is particularly true where the tenant has entered an insolvent liquidation process.

Surrender of a lease terminates the tenancy and relieves the tenant and any guarantor of all future obligations in respect of the lease.  As a condition of accepting the surrender, the landlord will generally request payment of all outstanding sums due to the date of the surrender.  In deciding whether to accept a surrender, the landlord should try to assess the proportion of the arrears due under the lease which it would be likely to recover in the liquidation as an unsecured creditor.

Once the lease is surrendered, the landlord will not be entitled to make any claim for loss of rent that would have been payable during the remainder of the term of the lease, unless this has been expressly provided for in the surrender.  In negotiating the surrender, a landlord may stipulate that the liquidator must admit that the landlord may claim for loss of future rent.  Any such claim will likely be written down in the liquidation.

No surrender – what next?

Unless the liquidator perceives the lease can be sold on at a premium, then an effort to agree a voluntary surrender with the landlord is likely, save where the premises are required for the winding up of the company’s affairs.

If there is no agreement in relation to surrender and the lease is ultimately disclaimed, the landlord may bring a claim for all outstanding rent arrears and other sums due and a claim for damages for loss of future rent.  In typical commercial leases, damages for loss of future rent are measured on the basis of the difference between the rent the landlord would have received under the lease (but for the disclaimer) and the rent it is likely to receive from a re-letting during the unexpired residue of the lease.  This sum is then discounted to reflect the fact that the landlord is receiving the future rent in an accelerated manner, as a capital sum.

Landlords should bear in mind that, while they may prove the total sum due, including damages, as a debt in the winding-up of the company, the sum may be significantly written down in the liquidation.

In considering a request for surrender of a lease by an insolvent tenant or a liquidator, a landlord should consider a number of factors, including:

If you wish to discuss any of the issues raised in this article, please contact Michael Walsh or Michelle McVeigh from our Property/Real Estate Team, John Fitzgerald from our Restructuring and Insolvency Team or your usual ByrneWallace contact.

Please note that the content of this article does not amount to professional advice. Legal and tax advice should be sought in respect of specific queries. This update is provided on the basis of information available as at 18 December 2020.