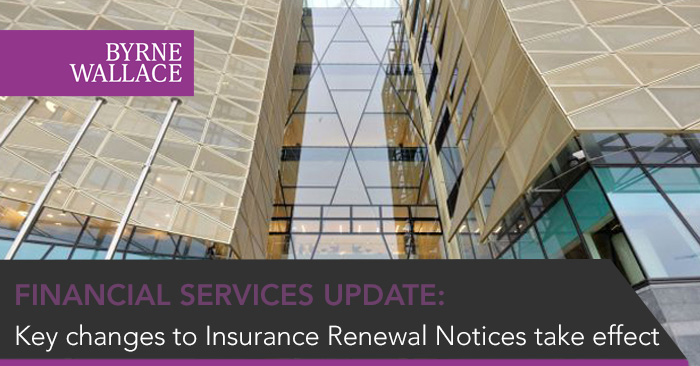 From 1 November  2019 the Central Bank’s Non-Life Insurance (Provision of Information) Regulations, in force since 20071 (the “2007 Regulations”), are due to be updated with a series of amendments designed to better protect consumers when renewing insurance policies, other than life assurance policies, In Ireland, and help tackle rising costs.

The 2007 Regulations, themselves a replacement of the 2002 motor insurance renewal regulations2,  represented a significant break with what had gone before, in that they extended the scope of renewal notice requirements from motor insurance to also encompass home, health, and various other classes of non-life insurance. The 2007 regulations also amended the scope of renewal notices subject to regulation - they provided for what information was to be provided when an insurer did not wish to invite renewal, what role an insurance broker or other intermediary played in the provision of information, etc.

The 2007 Regulations are largely seen as having been successful, with little change suggested by industry, regulators, or other stakeholders for nearly 10 years after their having entered into effect. In late 2017, however, given concerns expressed as to the impact of rising insurance premiums; changes and market developments in other, comparable, jurisdictions, such as the Insurance (Information Disclosure for Renewals) Instrument 20163 the UK; and in light of developments in the field of behavioural economics, the Central Bank published the first of two consultation papers concerning potential changes to the 2007 Regulations. Those consultation papers - CP 114 (of November 2017) and CP124 (of August 2018) - introduced the prospect of  requiring renewal notices be dispatched earlier than previously required; contain more detailed information, at least with respect to motor insurance renewals; contain details with respect to other coverage options; and various other developments.

Having considered submissions received as part of both consultation exercises, on December 19th 2018, the Central Bank made the  Non-Life Insurance (Provision of Information) (Renewal of Policy of Insurance) (Amendment) Regulations 20184, which amend the 2007 Regulations to take into account each of these proposals.

What are the changes?

As outlined in the Central Bank’s 2017-2018 consultation process, the principal changes to the 2007 Regulations are:

Certain other amendments are also provided for, including a technical fix in terms of the types of non-life policy in scope (previously “a renewal of a policy of insurance that occurs on or after the commencement” of the regulations, becomes policies “entered into on or after” commencement, reflecting the fact that the regulations provide for, and regulate, the non-renewal of policies as well as renewal).

Whether or not the revisions due to the 2007 Regulations will have the impact sought remains to be seen, and evidence gathered in the United Kingdom over a year after some similar changes were effected there suggested that the percentage of home insurance customers who shopped around at renewal increased by 3%, whilst for motor cover, that figure was 1%5 - note that only private motor cover is subject to the relevant requirement in Ireland. What is certain is that insurers will need to have engaged in extensive system development and testing to be able to produce compliant renewal notices for 1 November 2019, taking into account potentially complex calculations on annualised premiums. Whether or not these revised regulations meet the objectives of policy makers remains to be seen, but it is unlikely that this will be the last measure designed to reduce insurance costs in Ireland, or close to it.

For further information on the consultation process, or for advice on insurance or financial services more broadly, contact Damien McShane or Joe Gavin from the ByrneWallace Financial Services team.

[3] Amending the FCA’s Insurance Conduct of Business Sourcebook, and in particular Rule 6.5