VIEW ALL
Publications & Insights Trends in Merger Control
Share This 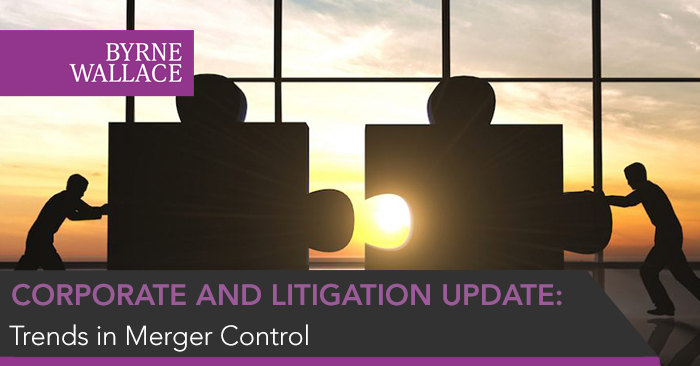 1.  Trends in transactions notified in Ireland

The overall number of mergers and acquisitions notified to Ireland’s Competition and Consumer Protection Commission (“CCPC”) reduced from a record high of 98 in 2018 to just 47 in 2019.  However, this decrease was widely expected based on the introduction of higher turnover thresholds for mandatory notifications to the CCPC in January of last year.

The transactions assessed most frequently by the CCPC in 2019 were in the healthcare, real estate, and information and communications sectors. Remarkably, almost half of the total 2019 notifications were filed in Q4, likely as a result of M&A market uncertainty caused by the spectre of Brexit in the early part of the year.

Greater certainty around a Brexit outcome will ensure this rebound continues into 2020, with an overall increase in the number of notified transactions likely. It is predicted that there will be some consolidation and strategic acquisitions in the technology, pharmaceuticals and agribusiness sectors in particular

The CCPC appears intent on continuing to scrutinise and pursue procedural breaches thoroughly. In January 2020, the CCPC noted that the Daily Mail and General Trust Plc acquired control of JPIMedia Publications, a UK company that operates the "i" newspaper prior to receiving CCPC approval. This is a breach of Section 19(1) of the Competition Act 2002 (as amended), which prohibits the implementation of transactions by parties prior to CCPC clearance (so-called “gun-jumping”). As a result, the transaction was deemed automatically void as a matter of law and is now pending CCPC approval.

This development follows the first criminal conviction for gun-jumping in Ireland in April 2019, in which Armalou Holdings Limited pleaded guilty in the Dublin District Court to illegally concluding a merger without obtaining CCPC approval before implementing  its acquisition of Lillis-O’Donnell Motor Company in December 2015.

The CCPC’s practice in this area is consistent with the strict approach taken at EU level for procedural breaches relating to merger control. For example, in 2019, the European Commission fined General Electric €52 million for providing incorrect information as part of its notification and also separately fined Canon €28 million for gun-jumping by partially implementing its acquisition of Toshiba prior to merger clearance.

3. Introduction of a simplified merger procedure

The CCPC is expected to formally introduce its proposed guidelines for a simplified merger procedure in early 2020 for mergers and acquisitions that "clearly do not raise competition concerns in Ireland". The introduction of the new guidelines is a welcome development for parties to mergers and acquisitions, particularly where there is limited overlap in their business activities.

Currently, the CCPC has a default 30 working day preliminary investigation timeline, which is longer than the 25 day timeline prescribed by the EU Merger Control Regulation for mergers within the European Commission's jurisdiction. In practice, the average CCPC clearance times for "no issues” mergers remained the same in 2019 despite the significant decrease in the number of mergers notified. Mergers benefiting from the simplified procedure will not require extensive analysis by the CCPC and result in significantly shorter clearance times.

However, one potential issue with the proposed guidelines is the number of safeguards and exclusions from the simplified procedure and how they might be interpreted in practice. Ultimately, the operation of these exceptions and their effect will only be fully known once the guidelines are introduced. In any event, although there is currently no formal simplified procedure currently in place, there is existing provision for parties to apply for a waiver from completing certain sections of the CCPC’s notification form where there is very limited overlap between the business activities of the parties.

Meanwhile, there are no significant proposals expected at EU level in 2020 likely to affect Irish merger control. However, the European Commission’s 2019 report on competition policy for the digital era considered the suitability of existing EU merger control rules in digital markets. A frequently discussed proposal (being piloted by German and Austrian competition law) is to adopt a "value of the transaction" threshold test to capture mergers involving the acquisition of start-ups with low turnover but high value.