Preparation for Brexit – Enactment of the Brexit Omnibus Act 2020 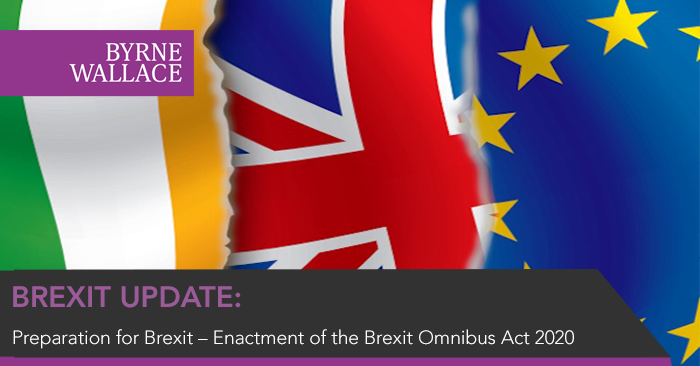 The Irish Government continues to prepare for the consequences of the UK withdrawal from the EU through the enactment of recent legislation.

A large portion of the Brexit Act provides continuity in maintaining access to certain taxation reliefs and allowances and revises primary tax rules concerning income tax, capital acquisitions tax, corporation tax, VAT and stamp duty. For example, those currently enjoying tax relief for contributions to UK pension plans will continue to do so following the end of the transition period on New Year’s Eve.

The Brexit Act amends the Protection of Employees (Employers’ Insolvency) Act 1984 to ensure that employees of UK companies who work and make their social insurance contributions in Ireland will continue to be covered by the insolvency payments scheme. The Brexit Act provides that, in the event of an employer becoming insolvent under the laws of the UK, any persons employed or habitually employed in Ireland will be entitled to claim arrears of pay, holiday pay, pay in lieu of statutory notice and various other entitlements under the insolvency payments scheme.

The Employment Permits Act 2006 provides that an employment permit will not be issued unless at least 50% of employer’s employees are EEA or Swiss nationals. The Brexit Act ensures that UK nationals are included in this 50% to avoid considerable disruption for companies applying for new employment permits and permit renewals.

The Brexit Act amends existing immigration legislation to maintain the current system for the transfer of international protection applicants between Ireland and the UK, with a view to designating the UK as a safe third country. Where an applicant for international protection has arrived in Ireland from a safe third country, their protection application may be deemed inadmissible, and the Minister may then make a return order in relation to that applicant. The Brexit Act requires the Minister for Justice to assess the possibility of refoulement when considering removing or deporting a person from the State. ‘Non-refoulement’ is an international legal principle that prohibits the forcible return of refugees or asylum seekers to a country where they are likely to be subjected to persecution.

The Brexit Act also provides a basis in law for taking fingerprints of an asylum applicant for the purpose of checking if a country other than an EU Member State is a first country of asylum or if a person has arrived in the State from a safe third country.

The Brexit Act makes necessary amendments to support the implementation of the European Commission’s equivalence decision under the Central Securities Depositories Regulation. This decision allowed the European Securities and Markets Authority to begin a formal recognition process of Euroclear UK and Ireland which serves Euronext Dublin, and permitted Irish securities to continue to be settled through Euroclear UK and Ireland until the Irish market migrates to Euroclear Bank Belgium. This migration project must be completed by 30 March 2021. The Brexit Act also amends the Companies Act 2014 to facilitate the new Euroclear Bank Belgium model.

In relation to insurance and reinsurance, sections 79 and 80 of the 2020 Act establish a 15-year temporary domestic runoff regime for certain insurance undertakings and insurance intermediaries. This ensures no immediate disruption to existing policies held by Irish policyholders. This can be contrasted with the proposed 3-year runoff period under the 2019 Act. Instability in the UK insurance market may lead to an increased demand for domestic insurance policies as a result. Further, UK insurance companies may seek to establish Irish branches to service the EU/Irish market.

Since the enactment of the 2019 Act, the Withdrawal Agreement and Protocol on Ireland / Northern Ireland has explicitly provided a legal basis for the continued operation of the Single Electricity Market (SEM).  Regardless of the outcome of current trade deal negotiations, the SEM will continue to operate as an all-island market from 1 January 2021. Market participants in Northern Ireland should be aware of any alternative trading arrangements that may arise between Great Britain and Northern Ireland.

The prospect of a no-deal Brexit re-emphasised the need for contingency measures to mitigate against any detrimental impact on Irish businesses. We will continue to monitor and update on the commencement of various parts of the 2020 Act by the relevant Ministers that may arise following the end of the transition period.

ByrneWallace has established a dedicated multi-disciplinary team to advise and represent both Irish and international businesses on the legal and regulatory implications of Brexit. For more information or general advice on what Brexit might mean for you and your business, contact a member of our Brexit Team.