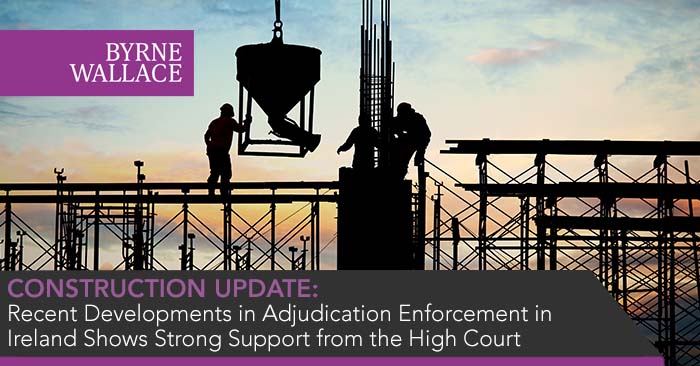 Following the introduction of the Construction Contracts Act 2013 (“the Act”) and statutory adjudication in Ireland, the High Court rules have been amended by Order 56B to introduce a process for application for leave to enforce adjudication decisions.

However, the system was slow to list applications and diminished the value of the process. In April of this year, a new practice direction was issued with Mr Justice Simons appointed as the presiding judge for such applications, which are now listed for the next available Wednesday with the aim of speeding up the process.

Where an adjudicator has awarded a sum to a party, that party must pay first before being able to have the payment reviewed.

Two recent cases in the High Court have shown support for the Act and enforcement process. Both Meenan J and Simons J embraced the intentions of the Act in providing interim binding decisions for construction payment clauses.

This case concerned an application by the contractor, Principal Construction Limited (“the Applicant”) for leave to enforce or enter judgment arising from an adjudicator’s decision. The enforcement was resisted by the employer, Beneavin Contractors Limited (“the Respondent”) on grounds of breach of rules of natural justice by the adjudicator’s failure to consider its counterclaim and further, whether an adjudication can be brought after the issue of a final certificate under the RIAI form of contract.

The Respondent submitted that based on the wording in Clause 35 of the RIAI Contract, as the Applicant had failed to dispute the final certificate within the time provided it could not subsequently refer the matter to Adjudication. Meenan J concluded that given the purpose of the Act is to provide a summary procedure to enforce payment of moneys under a building contract, notwithstanding that it might ultimately transpire that the moneys are not in fact owed and that the Act applies irrespective of the terms of the contract between the parties, the Respondent was entitled to refer the matter to Adjudication regardless of the Final certificate. He concluded that a party has a clear unfettered right to refer a payment dispute to adjudication. Furthermore, he concluded that the wording “if binding”, in s. 6(11) of the Act, ought to be interpreted in a narrow context.

Finally, the Respondent submitted that the adjudicator’s refusal to allow the Respondent to prosecute its counterclaim was a material breach of the rules of natural justice. Meenan J found that since the adjudicator had considered the substance of the counterclaim, he had therefore acted within the principles set out by Coulson J in Pilon Ltd v Breyer Group PLC [2010] EWHC 837 (TCC). Meenan J found for Principal Construction Limited.

This case concerned an application by the subcontractor, Aakon Construction Services Limited (the “Applicant”) for leave to enforce an adjudicator’s decision to pay the amount set out in the Applicant’s payment claim notice. The enforcement was resisted by the main contractor, Pure Fitout Associated Limited (the “Respondent”) on the grounds that the adjudicator lacked jurisdiction, including the contention that the notice to refer the dispute to adjudication was invalid due to ambiguity, that several claims were unlawfully advanced and that two attempts were made to apply for the appointment of an adjudicator. Additionally, the Respondent claimed that there was a breach of fair procedures in the adjudicator’s failure to consider all of their defences.

One of the principal issues to determine in the adjudication in his view was whether the respondent’s failure to respond to the payment claim notice resulted in an entitlement on the part of the applicant to be paid the full amount.  This he held was precisely the dispute which the adjudicator ultimately decided and there was “simply no basis for saying that the adjudicator exceeded his jurisdiction”.

On the claim that the adjudicator should have considered the “true” value of the works, Simons J held that this was unfounded.

While assessing the respondent’s argument that the notice does not specify the relief or redress sought, Simons J clarified the difference between UK legislation and Irish legislation, the latter of which does not have an express statutory requirement to set out the relief sought.

On the argument that multiple claims were unlawfully advanced, Simons J again warned about failing to distinguish the difference between UK and Irish legislation. Under s6(9) of the Construction Contracts Act 2013, an adjudicator may deal with several payment disputes at the same time.

Simons J then moved on to consider the argument that two applications for the appointment of an adjudicator were made and  that there was a material difference in the brief outline in the two application forms. Simons J held that any difference in wording in the application form to the Construction Contracts Adjudication Service was irrelevant, the first application was succeeded by the second and that the notice of intention to refer would prevail.

Simons J also clarified the interpretation of the words “if binding” as set out in Principal Construction. He explains that these words “are not intended to suggest that the binding status…is qualified or uncertain”. They are “merely intended to address the contingency of the adjudicator’s decision having been superseded by a subsequent decision or an arbitrator or a court”.

On the enforcement of an adjudicator’s decision, Simons J found for Aakon Construction Services Limited, concluding that it could be enforced in the same way as a High Court judgment and gave rise to an immediate payment obligation.

Implications of the Judgments for Construction Adjudication in Ireland:

The judgments show the importance of the Notice of Intention to Refer, that it should set out clearly and comprehensively the claim being made and the basis for it but the detail may be further expanded upon in the Referral and where the Code of Practice is silent on the status of the Notice of Intention to Refer, this could be a considerable detail.

They reinforce the underlying principle of adjudication as an expeditious and cost effective way to resolve construction disputes. The ‘pay now, argue later’ approach was relied on and it was decided that it creates an immediate payment obligation and ensures continued liquidity for work to continue uninterrupted and prevent delays in projects. The Court also reiterated the importance of the ability to enforce the decision promptly by binding the parties on a provisional basis. You are entitled to have the true value of the claim subsequently adjudicated but if the adjudicator finds that a default payment is triggered, you must pay the interim binding decision first.

In Aakon Construction Services Limited v Pure Fitout Associated Limited, Mr Justice Simons upheld the interim binding nature of the process and it appears that unless there is a clear breach of the rules of natural justice, enforcement of the adjudicator’s interim decisions in Ireland will be difficult to resist in the High Court.

In his judgment, Simons J made reference to the importance of expedition in the enforcement process and stated that the time limits set by Order 56B should not be seen as aspirational by parties and should be complied with unless there is good reason not to. Adjudication enforcement proceedings in Ireland therefore, will from now on be dealt with on a fast tracked basis by the Courts which will enhance the effectiveness of the process. Parties can now rely on the fact that if they succeed before an adjudicator and then face an enforcement challenge, that challenge will be heard and concluded in a short period of time. In Aakon Construction Services Limited v Pure Fitout Associated Limited, it was three months in total from the start to the finish of the process.

For further information on adjudication enforcement, or general legal advice on this topic, contact Deirdre Hennessy, Christopher Woods or any member of the ByrneWallace LLP Infrastructure, Construction and Energy Group.