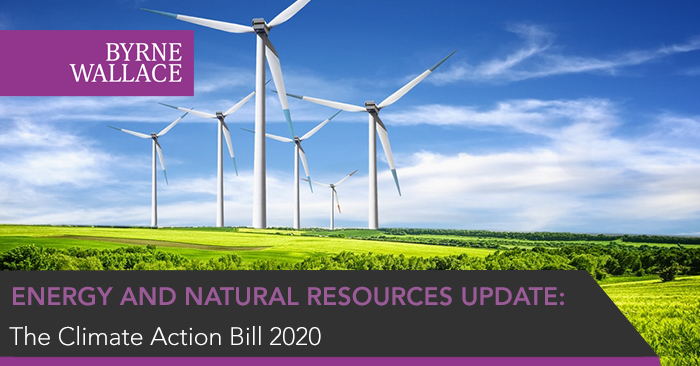 Key provisions in the Climate Action Bill, include proposals to:

The objective of achieving net-zero emissions by 2050 is consistent with the European Commission’s proposal for the first European Climate Law, which would legislate for Europe’s economy and society also to become climate-neutral by 2050.

Launching the Climate Action Bill, the Taoiseach, Mícheál Martin TD, described it as “ground-breaking” and that it would have a “transformative impact on our society and economy into the future”. The Climate Action Bill does not stipulate the specific content of the carbon budgets, carbon reducing policies or sectoral targets but does represent a framework to plan, measure and account for a “climate neutral economy”.

The Minister for Climate Action, Communication Networks and Transport, Eamon Ryan TD, stated that the Climate Action Bill represents a “rapid departure for Ireland” which will “change how we heat our homes, generate power, move around our country, grow our food and run our businesses.… I believe it also creates great opportunities for Ireland to be a leader in renewable power, repair and retrofitting, sustainable agriculture and the circular economy.”

Next steps for the Climate Action Bill?

The Climate Action Bill is now due to go to Pre-Legislative Scrutiny. Speaking at the launch of the Bill, Minister Ryan has indicated that the Climate Action Bill may be finalised by the end of the year and that it is hoped it will be enacted and implemented within a year. Given it took several years for climate change legislation to be enacted by way of the 2015 Act, this too could be an ambitious target.

We will continue to monitor the Climate Action Bill’s legislative progress and provide updates on key developments.

For further information on the Bill and other climate action measures, or general legal advice on this topic, contact Gavin Blake, Kelly Mackey or any member of the ByrneWallace Energy and Natural Resources Team.