The New Restructuring Tool for Small and Micro Companies 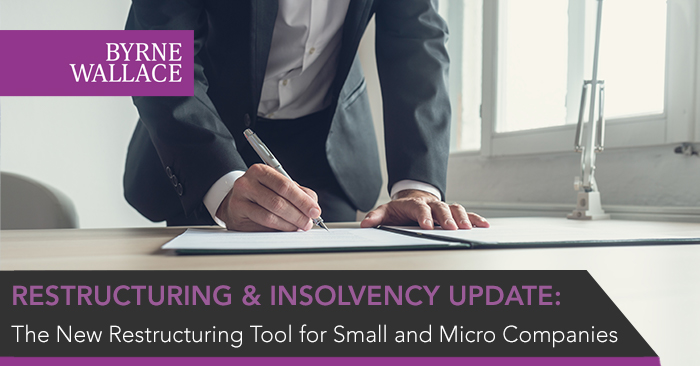 The Department of Enterprise, Trade and Employment has published the General Scheme of the Companies (Small Company Administrative Rescue Process and Miscellaneous Provisions) Bill 2021. The General Scheme of the Bill amends the Companies Act 2014 to provide for a rescue process specifically designed for small and micro enterprises known as the Small Company Administrative Rescue Process (“SCARP”). Up to 98% of companies fall within the definition of small and micro enterprises and thus have the option to avail of the process where the eligibility criteria are met.

The aim of the Bill is to provide a simplified restructuring process for such enterprises, which mirrors some key elements of the existing examinership framework in an administrative context. It is commenced by resolution of the directors rather than by application to court and has limited court involvement in circumstances where creditors are engaged in the process and positively disposed to the rescue plan. As such it should be more timely and cost effective and provide a genuine alternative to the examinership process for such enterprises.

Under the proposed SCARP regime, which is overseen and assisted by an insolvency practitioner known as a “Process Advisor” rather than an Examiner, the Process Advisor will prepare a rescue plan for the company which will be subject to a vote of the company’s creditors.  This rescue plan must satisfy the “best interest of creditors” test and provide each creditor with a better outcome than liquidation. In addition, no creditor may be unfairly prejudiced by the plan. This is in keeping with established principles under examinership. The rescue plan will be subject to a vote of the company creditors at a creditors meeting.  Provided a simple majority in value of an impaired class of creditors vote in favour of the plan, the rescue plan is binding without the need for court approval.  Where there is an objection to the rescue plan, there is an obligation of the company to seek the court’s approval. This acts as a safeguard for creditors.

The SCARP process aims to be concluded in 70 days, subject to extension were necessary, as opposed to the examinership process which can currently run for up to 150 days.

According to Mr. Robert Troy, Minister of State for Trade Promotion, Company Regulation and Digital, the Government sees the proposed regime as a key part of the response to the impact Covid-19 has had on businesses particularly in the retail, hospitality and service industry. It is hoped that as the economy re-opens post Covid this regime will support companies to trade and rescue indebted but viable companies using this streamlined process.

If you require further advice in relation to the content of this article, please contact John Fitzgerald, Partner and Head of Restructuring and Insolvency or Ciara McDermott, Associate of our Restructuring & Insolvency team, or your usual firm contact.