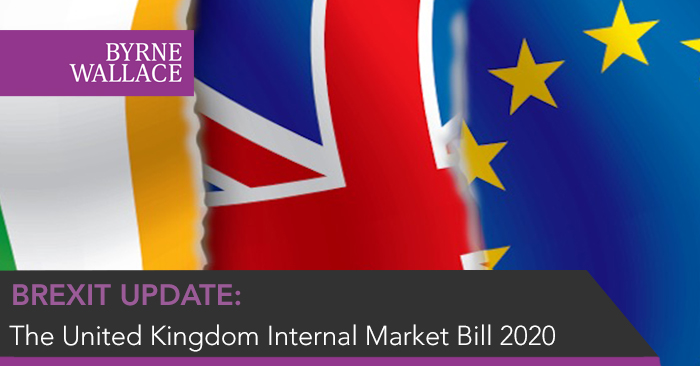 The UK Government published the United Kingdom Internal Market Bill 2020 (the “Bill”) on 9 September, which will be considered by Parliament over the coming days. The Bill’s publication immediately set off diplomatic tensions between Westminster, Brussels and Dublin as it effectively proposes to allow UK ministers to unilaterally breach the Withdrawal Agreement negotiated between the EU and the UK (the “Withdrawal Agreement”). The EU has warned that it may take legal action against the UK Government in relation to the Bill.

The Withdrawal Agreement was extensively negotiated and signed on 24 January 2020 as a legally binding international agreement setting out the relationship between the UK and the EU after the UK’s departure from the Union, which took effect on 31 January 2020. The Withdrawal Agreement contained key provisions regarding Northern Ireland’s trading relationship with Great Britain and the EU. A hard border on the island of Ireland was avoided through placing a de facto customs border in the Irish Sea in relation to goods moving between Northern Ireland and Great Britain.

Sections 42 and 43 – dis-applying the Withdrawal Agreement

The Bill is designed to regulate the UK’s “internal market”, which consists of Great Britain and Northern Ireland. Many of its provisions are non-controversial trade regulations. However, as currently drafted, the Bill also allows UK Government ministers to unilaterally dis-apply provisions of the Withdrawal Agreement relating to:

More bluntly, section 45(1) of the Bill provides that the UK’s Parliament has supremacy over the UK’s already existing international legal obligations (i.e. the Withdrawal Agreement). It states that sections 42 and 43 “have effect notwithstanding any relevant international or domestic law with which they may be incompatible or inconsistent". This is a highly unusual approach to drafting legislation, in that the Bill envisages its own inconsistency with the state’s binding legal obligations.

The EU had made its view of the Bill clear. In the words of EU Commissioner Maros Sefcovic, "It would constitute an extremely serious violation of the Withdrawal Agreement and of international law". The UK Government appears intent on passing the Bill, while also stating that it intends to fulfil its obligations under the Withdrawal Agreement. It is difficult to see how the UK Government’s position on the Bill can be reconciled with the UK’s existing legal obligations.

Matters are complicated further as the EU and UK are yet to agree a trade deal governing their long-term relationship. The Bill may end up before the courts while the trade negotiators try to get a deal done before the UK reverts to World Trade Organisation rules of trade with the EU next year.

The Bill is only proposed legislation, and contentious legislation at that. Whether it actually becomes law is a matter of political and legal debate which will be addressed over the coming weeks. Even if the Bill is passed by Parliament, it is likely to be subject to legal challenge.

The UK’s Northern Ireland Secretary, Brandon Lewis, stated during a Parliamentary discussion of the Bill that it would “Break international law in a very specific and limited way”. That the UK Government has proposed legislation which is designed to breach its recently-agreed international obligations does not provide the certainty and stable legal environment which businesses need, particularly those which operate across borders.

For more information or advice on what Brexit will mean for you and your business, please contact Gerry Beausang of our Brexit Team or your usual ByrneWallace contact.