What Next for the National Standards for Children’s Social Services 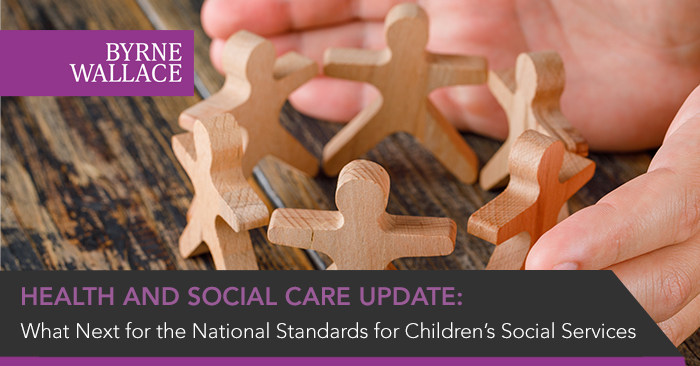 HIQA is the regulator for health and social care services under the Health Act 2007, reporting to the Minister for Health and engaging with the Minister for Children, Equality, Disability, Integration and Youth Affairs. As part of its statutory role, HIQA is tasked with setting standards for the services it regulates including those which are provided to children at risk or in the care of the State. To that end, HIQA has been developing since 2019 the Draft National Standards for Children’s Social Services (the “Draft Children’s Standards”).

Existing national standards in this area are divided amongst specific settings: child protection and welfare services, foster care, special care and children’s residential centres. With the Draft Children’s Standards, HIQA aims to achieve greater uniformity in the national approach to children’s services and promote quality improvements in the care being provided to service users. This is underpinned by four principles: a human rights based approach, safety and wellbeing, responsiveness and accountability.

When implemented the Draft Children’s Standards will be one set of national standards for children’s welfare and protection services regulated by HIQA, from the point of a child’s referral to transfer or discharge. They set out the outcomes which will be expected from services, providing what HIQA describe as “a common language” to describe what they should look like.

The Draft Children’s Standards were published for consultation with stakeholders in March and April 2021. With that period now closed, HIQA are collating the feedback received so as to further inform the development process. The final standards will be presented to the Board of HIQA for confirmation, following which they will be submitted for approval to the Minister for Health, in consultation with the Minister for Children, Equality, Disability, Integration and Youth.

Operating under the Overarching National Standards for the Care and Support of Children using Health and Social Care Services currently in development, the Draft Children’s Standards will represent one of the biggest changes in standards for children’s services in almost a decade, and will be used as HIQA’s standards development framework into the future.

For further information or advice, please contact Eoghan Wallace and John Anthony Devlin or any member of the ByrneWallace LLP Health and Social Care team.