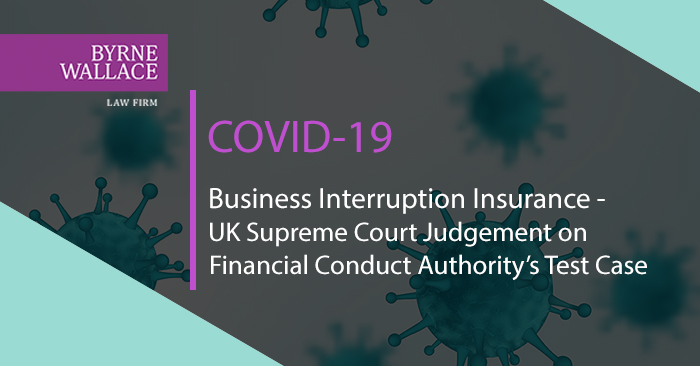 On 15 January 2021, the UK Supreme Court delivered its much anticipated judgment on the Financial Conduct Authority’s (“FCA”) test case.

In a landmark decision affecting approximately 370,000 UK policyholders1, the Supreme Court found in favour of the FCA, and SME policyholders respectively, whilst unanimously rejecting the defendant insurers’ appeals from the High Court judgment.

This judgment materially broadens the cover which is available to UK policyholders for business interruption losses caused by COVID-19 and matters/circumstances inextricably linked to the pandemic.

It is expected that this judgment will be considered by the Irish High Court prior to delivering its decision in the proceedings commenced by policyholders against the insurance company, FBD. That judgment is due to be delivered by Justice McDonald on 5 February 2021.

If the UK Supreme Court’s reasoning on causation and trends clauses is adopted by the Irish High Court, it is expected that Irish policyholders will have strong claims for business interruption loss caused by the COVID-19 pandemic and its wider effects. In addition, the level of payments potentially due to Irish policy holders is also likely to be significantly higher than initially expected due to the UK Supreme Court’s interpretation of trends clauses.

This judgment is a welcome development for many struggling Irish SMEs in the retail, hospitality and leisure sectors who may have presented COVID-19 business interruption claims previously to their insurers but have been told that their claim was declined or may have had limited, if any, engagement from their insurer to date.

Businesses should now review their insurance policies again in light of these developments and take advice to establish whether their business interruption claim should be assessed more favourably by their insurers now.

In its judgment, the Supreme Court categorised the issues being appealed as set out below:

The Supreme Court largely agreed with the scope of cover provided by disease clauses. Namely, that disease clauses do not confine cover to business interruption resulting only from cases of COVID-19 within a specified area (as defined in any given policy) and that due consideration should be given to the potential for COVID-19 to affect a wide area.

The Supreme Court did however construct the disease clauses before it more narrowly than the High Court. Upon considering various policy wordings (in particular, RSA wording2), the Supreme Court concluded that only an occurrence within the specified area was an insured peril and not anything outside that area. The Court also considered that each individual case of COVID-19 constituted a separate occurrence and that the term “Notifiable Disease” is not the outbreak or disease itself, but the illness sustained by a person at a certain time and place.

However, because of the court’s agreement with the High Court on the scope of cover provided under such clauses and its approach to causation (see below), the disease clauses will still respond to interruption caused by the pandemic.

In relation to the disease elements of the hybrid clauses, the Supreme Court reached the same interpretation as that for disease clauses mentioned above.

The Court made the following key findings for prevention of access and hybrid clauses:

The defendant insurers have, to date, argued that for policy cover to be triggered it is necessary to show, at a minimum, that a policyholder’s loss would have not been sustained ‘but for’ the occurrence of the insured peril. Insurers have argued that the policies do not respond because the widespread nature of COVID-19 meant that an insured party would have suffered the same, or similar, business interruption losses even if the insured peril had not occurred.

The Supreme Court analysed the ‘but for’ test in detail and held that such a test was not determinative in concluding whether the test for causation had been satisfied.

Crucially, the court considered that there is nothing in the principle of causation which prevents an insured peril, which in combination with many other similar uninsured events, brings about a loss with a sufficient degree of inevitability from being regarded as a proximate cause of the loss. Whether the causal connection is sufficient to trigger policy cover and payment is dependent on what was agreed between a policyholder/insurer5.

For the clauses in issue, the court concluded that:

The judgment looked at trends clauses, reiterating that, absent wording to the contrary, insurers cannot reduce indemnity otherwise due to an insured on the basis that the losses were caused by other, uninsured (but not excluded) perils, the underlying cause of which was the pandemic. The Supreme Court stated that “the standard turnover or gross profit derived from previous trading is adjusted only to reflect circumstances which are unconnected with the insured peril and not circumstances which are inextricably linked with the insured peril, in the sense they have the same underlying or originate cause8”.

This approach ensures that trends clauses are construed in line with insuring clauses and does not take away cover otherwise provided by such clauses.

Separately, the court also considered pre-trigger losses, overturning the High Court’s conclusion. The Supreme Court held (in line with its position on the operation of trends clauses) that an indemnity should be calculated by reference to what would have been earned had there been no presence of COVID-19, having no regard for any revenue drop prior to the policy being triggered that resulted from the pandemic, or its wider effects.

In line with its approach to causation and the interpretation of the trends clauses, the Supreme Court held that the Orient Express case was wrongly decided and overruled it.

In particular, the court applied its analysis of causation (see above) to the same facts present in the Orient Express case. It concluded that business interruption loss which arose because both (a) the hotel was damaged and also (b) the surrounding area and other parts of the city were damaged by the hurricanes had two concurrent causes, each of which was by itself sufficient to cause the relevant business interruption but neither of which satisfied the ‘but for’ test because of the existence of the other. It considered that where both the insured peril and the uninsured peril, which operates concurrently with it, arise from the same underlying fortuity (the hurricanes), then provided that damage proximately caused by the uninsured peril (i.e. in the Orient-Express case, damage to the rest of the city) is not excluded, loss resulting from both causes operating concurrently is covered9.

2 The RSA policy wording considered was where an insured peril was the “occurrence of a Notifiable Disease within a radius of 25 miles of the Premises”. The term “Notifiable Disease” was defined as an “illness sustained by any person resulting from… any human infectious or human contagious disease… an outbreak of which the competent local authority has stipulated shall be notified to them.”