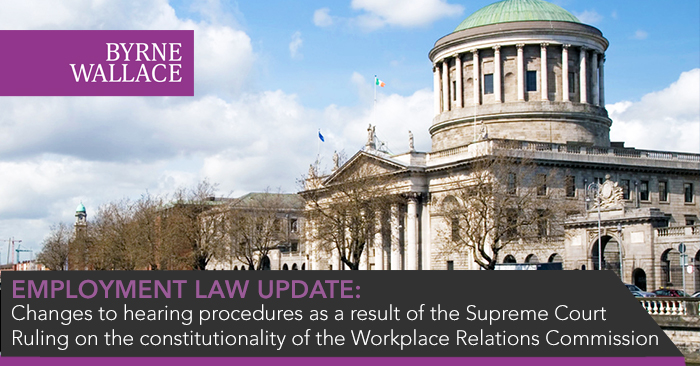 In the judgment delivered by Mr Justice O’Donnell, the Supreme Court, in considering an appeal from the High Court, found that the WRC’s power to adjudicate workplace disputes does not “offend the Constitution”. It was concluded that the WRC exercises limited judicial powers and functions and is therefore covered by Article 37 of the Constitution. However, the Supreme Court held that (a) the requirement that hearings be held in private and (b) the absence of any provision for taking evidence on oath were inconsistent with the Constitution.

This ruling has led the WRC to issue a Notice in relation to changes to its procedures. Legislation is also currently being drafted to enable the WRC to continue to discharge its functions in accordance with the Constitution.

Mr Zalewski lodged complaints with the WRC claiming unfair dismissal under the Unfair Dismissals Act 1977 – 2015 and for payment in lieu of notice under the Payment of Wages Act 1991 after having been dismissed by his former employer, Buywise Discount Store Ltd. The parties attended the WRC for hearing at which the Adjudication Office accepted written submissions and documentation. The matter was adjourned, however, in order to allow for the attendance of a witness for the employer. A further hearing date was subsequently scheduled. However, when the parties attended the rescheduled hearing, they were informed that the hearing had been scheduled in error and that the Adjudication Officer had already issued a determination, dismissing Mr Zalewski’s claims.

Mr Zalewski commenced judicial review proceedings, seeking an order quashing the decision of the Adjudication Officer, which was conceded by the State respondents.  He also sought a wide range of declaratory reliefs including that the Workplace Relations Act 2015 (the “2015 Act”) was repugnant to the Constitution. In this regard, Mr Zalewski raised the following four complaints:

However, in respect of the complaints raised by Mr Zalewski about the constitutionality of the procedure under the 2015 Act, the Supreme Court held:

The WRC issued a Notice on 16 April 2021 setting out certain procedural changes in light of this Supreme Court judgment. The key changes are as follows:

(2) Conflicts of Evidence – Administering the Oath

The WRC has stated that it will update its procedures in line with new legislation and policy, when this is enacted. A link to the WRC Notice as published is attached here.

The Minister for Business, Employment and Retail confirmed that the government will introduce legislative amendments without delay to enable the WRC to continue to discharge its statutory functions in line with the Constitution. He confirmed that his department is currently drafting emergency legislation to be introduced as a matter of urgency in the coming weeks.

Current and potential complainants and respondents should familiarise themselves with the new WRC procedures, keeping in mind that they will be updated.

As we await the amending legislation, parties can expect that delays with hearings are likely. An application for an adjournment is typically made shortly after receiving notification of a hearing date. However, bearing in mind that the WRC Notice also includes a provision that:

“…unless a postponement is granted in advance, all currently scheduled hearings will commence in the normal manner and proceed to conclusion subject to the requirement that it will be necessary to adjourn where a serious, direct conflict of evidence arises,”

the parties to a complaint should be prepared for the possibility that an advance adjournment application may be refused and that they may have to prepare for, and attend, the scheduled hearing and make the adjournment application at the commencement of the hearing. The WRC Notice states that the parties may use the hearing to “case manage the complaint(s) to identify areas of contention and/or agreement”.

The fact that WRC hearings may become more protracted, formal and will be conducted in public may lead some parties to consider mediation or to explore direct resolution of complaints in advance of matters proceeding to hearing.