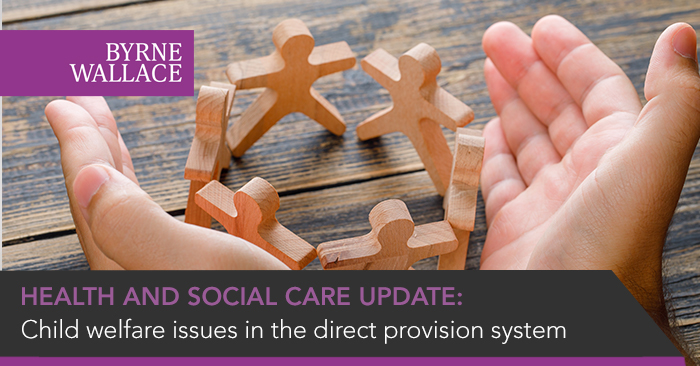 The Ombudsman for Children’s Office (the “OCO”) has published the findings of its investigation into the safety and welfare of children in direct provision (the “OCO report”), the latest in a series of papers looking at children in direct provision (“DP”). DP is the Irish system for reception and accommodation of persons awaiting decisions on asylum / international protection applications. The Irish Refugee Council reported in 2020 that there were approximately 7,400 people in Direct Provision, approximately one third of whom are children.

The OCO report follows an ‘own volition’ investigation, as it notes that people in DP are reluctant to complain or to draw attention to themselves. It highlights a number of concerns, including in relation to vetting and training of staff, notices given to parents, and a failure to report a serious child protection concern. There were also concerns about interpretative services and oversight mechanisms in the system.

Arising from its concerns, the OCO makes a number of recommendations, including the end the use of commercial emergency hotels, and implementing a well-resourced quality assurance mechanism to monitor complaints, child protection and welfare concerns and any other incidents in order to be assured about the quality of services provided.

Earlier reports into children in direct provision have highlighted the detrimental impact of the system on children’s rights (Irish Human Centre for Human Rights), children’s dissatisfaction with it and their wellbeing while there (Department of Children), and called for its abolition and for children and their families to be placed instead in community-based, family friendly, secure accommodation (Royal College of Physicians).

The concerns raised can be viewed in the context of the government white paper setting out a new policy to replace DP in the coming years, and replace it with a new system of accommodation and supports emphasising integration and operating under the aegis of the Department of Children. In the meantime, however, the OCO calls for immediate improvements in the lives of children and families in DP.

For further information or advice, please contact Sinéad Kearney and John Anthony Devlin or any member of the ByrneWallace LLP Health and Social Care team.