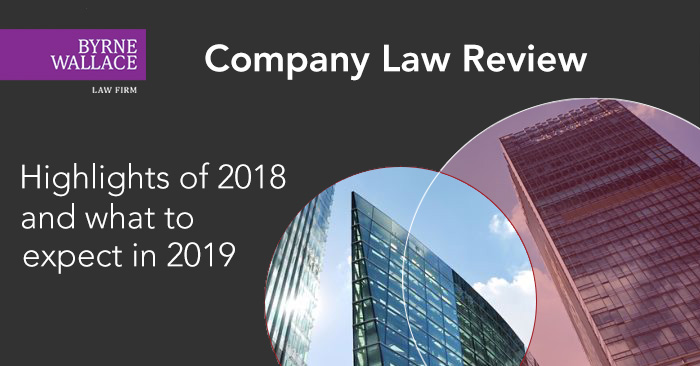 On 29 January last, the European Union (Anti-Money Laundering: Beneficial Ownership of Trusts) Regulations 2019 (the Regulations) quietly came into force with immediate effect. These Regulations apply to collective investment schemes constituted as trusts, as well as other common commercial, employment and financial trust-based arrangements such as security trusts and pension schemes. The Regulations are part of the anti-money laundering and counter-terrorism framework and introduce an obligation for express trusts to maintain an “express trust (beneficial ownership) register” or internal beneficial ownership register. The nature of the internal register is very similar to that which was introduced for companies and industrial and provident societies in 2016. Please see our overview of the Regulations  and the obligations they create for trustees and managers of collective investment schemes.

One aspect of 4AMLD not yet transposed is the requirement of each EU member state to establish a central register of beneficial ownership of corporates and other legal entities, and of beneficial ownership of express trusts, which was to be done by 26 June 2018. On 9 July 2018, the Fifth Anti-Money Laundering Directive (5AMLD) came into force, which introduces amendments to 4AMLD. 5AMLD has extended the deadline for introducing the central register to 10 January 2020 for corporates and other legal entities, and to 10 March 2020 for trusts. In Ireland, this central register will apply to companies and industrial and provident societies (IPSes) and will be known as the Register of Beneficial Ownership (the RBO). Its establishment and maintenance will be the responsibility of the Companies Registration Office (the CRO). The Department of Finance has advised that the implementing legislation for the introduction of the RBO is at an advanced stage and that the RBO is expected to go live ahead of schedule before the end of Q2 2019. A key change between the RBO as envisaged under 4AMLD compared to the remodelled RBO under 5AMLD concerns the extent of public access to the RBO. 4AMLD left the decision as to whether to permit broad public access to the RBO to the discretion of each member state but it is a requirement under 5AMLD that public access to the RBO be afforded.

Key Points ahead of the RBO Go-Live

On 7 January 2019, the Minister published the Companies (Amendment) Bill 2019 (the Bill), which proposes to make some minor amendments to the 2014 Act in order to reduce the administrative burden on companies. Currently, a company must deliver its annual return along with its financial statements, if required, to the CRO within 28 days of the company’s annual return date or, where a company makes its annual return up to a date earlier than its annual return date, within 28 days of that earlier date. The company then has a further 28 days to file the accompanying financial statements. The Bill seeks to simplify this process by extending the 28-day periods to 56-day periods, reducing the above steps to a single-step process. This week the Bill completed its journey through the Seanad and has been sent forward from the Dáil to Committee stage. As a straightforward technical amendment of the 2014 Act, the Bill is likely to progress quickly through the Houses of the Oireachtas.  Its enactment is due to be complemented by the CRO upgrading its IT system to accommodate the simplified filing system.

The Companies (Statutory Audits) Act 2018 was commenced, for the most part, on 21 October 2018. The Act enhances oversight of statutory audits and inserted new provisions into the Companies Act 2014 governing the conduct of statutory audits and regulation of the profession of statutory auditor. It was proposed by the Government in November 2017 as one of a suite of measures in a multi-departmental package designed to enhance Ireland’s corporate, economic and regulatory framework and combat white collar crime. The Act also fits within the broader context of the EU 2014 audit reform package (composed of Audit Directive and Audit Regulation) which was introduced in the wake of the recent international financial crisis, and sought to copper fasten statutory auditors’ independence, make audit reports more informative and strengthen audit supervision. Its enactment completes Ireland’s implementation of the audit reform package.

On 4 December 2018, the Minister for Business, Enterprise and Innovation published the General Scheme of the Companies (Corporate Enforcement Authority) Bill 2018 (the Heads of Bill), proposing reform of the Office of the Director of Corporate Enforcement which we have previously noted here. Another purposes of the Heads of Bill also attends to some housekeeping in respect of the Companies Act 2014 (the 2014 Act). A number of anomalies in the 2014 Act were previously identified by the Company Law Review Group and the Law Society of Ireland and the 2014 Act is now to be amended to redress certain of those anomalies. The proposed amendments are of a technical nature but some are of practical relevance to companies and directors, such as:

(a)  confirming disapplication of the requirement of unlimited companies to have distributable reserves to redeem their own shares;

(b)  restoring a provision under previous companies legislation that enabled a company with a share premium account to use the account for various purposes, such as writing off the company’s preliminary expenses, or the expenses of, or commission paid, or discount allowed on any issue of shares or debentures; and

(c)  a new ground for a Restriction Order to be made by the High Court against a director who fails to meet certain procedural requirements for convening a general meeting of  shareholders to appoint a liquidator, or to provide the required notice to employees upon the winding up of a company.

The Heads of Bill also propose a change to the manner in which information regarding the identity of directors is gathered by the CRO which has confirmed that it can face difficulties verifying director/secretary identities where the director or secretary uses different forms of their name on different forms submitted to CRO. This can result in duplication of entries on the register or possible breaches of company law, such as the prohibition on a person being a director of more than 25 companies or on being both a director and secretary of the same company in certain circumstances. Under the new proposal, directors would be required to provide Personal Public Service Numbers (PPSN) or copy passport page on incorporation of a company, the submission of annual returns or notification of a change in director or secretary. It remains to be seen whether this proposal will pass muster with the recently fortified data protection rules.

ByrneWallace will continue to update on future key company and corporate developments.

Related Articles:
What you need to know about the Beneficial Ownership of Trusts Regulations 2019
Corporate Crime Law Review - Proposal to Transform and Enhance the ODCE