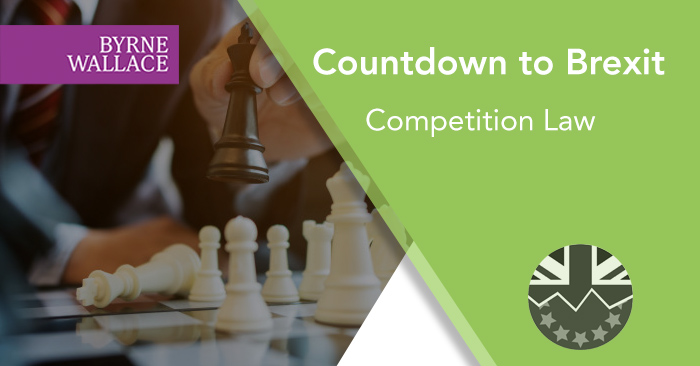 With the Brexit deadline fast approaching, the ByrneWallace Brexit team address various issues which will impact upon businesses either trading with or through the UK, or with suppliers in the UK, and/or with UK staff based in Ireland or staff in the UK. In the fourth of our spotlight series, we address Competition Law.

Critical issues for businesses to consider in a “No Deal" Brexit include:

Withdrawal Agreement/No Deal Brexit: If ratified, the Withdrawal Agreement will govern the UK’s ongoing legal relationship with the EU. Part Five of the Agreement contains mutual obligations in relation to competition law which maintain EU law principles in the areas of antitrust, State aid and merger control.  The Agreement also provides that the interpretation of those provisions will be in accordance with the EU competition law provisions and the Court of Justice of the European Union (CJEU), even where an independent UK Authority is assessing them. Therefore, the UK will have limited latitude to diverge from EU law in competition matters unless or until a negotiated future relationship agreement supersedes these provisions.

However, even in the absence of a Withdrawal Agreement, the UK’s European Union (Withdrawal) Act will apply. This Act provides that the provisions of EU law, including competition law, will be crystallised into and form a part of UK law upon exit date. Even though the UK would then be free to depart from the EU position, practically it is unlikely to do so in the short term.

Regardless of whether the Withdrawal Agreement is ratified or there is a No Deal, businesses ought to consider the following at a minimum:

For more information on the above or for general advice on this topic, please contact our EU, Competition & Regulated Markets Team or Gerry Beausang of our Brexit Team.