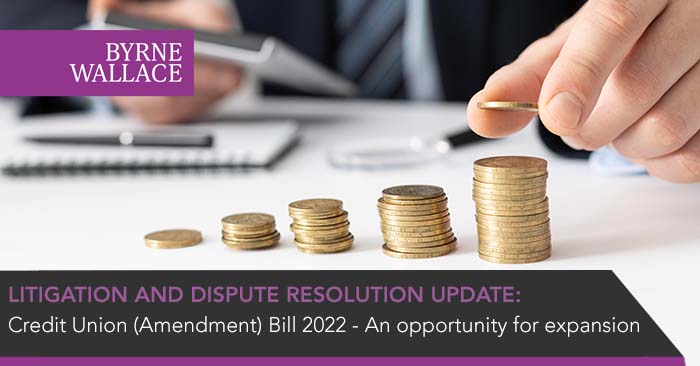 On 30 November 2022, the Credit Union (Amendment) Bill 2022 (the “Bill”) was published. The Bill gives effect to the proposals which emerged from the Review of Policy Framework of Credit Unions. If enacted, it would be the first substantive legislation relating to credit unions to be introduced since the Credit Union and Co-operation with Overseas Regulators Act 2012.

Through the amendment of the Credit Union 1997 Act (the “1997 Act”) the overall objective of the Bill is to promote collaborative efforts among credit unions and improve member’s services by widening of the range of products and services available. Minister of State with responsibility for Financial Services, Credit Unions and Insurance, Seán Fleming TD stated that the Bill “will help Credit Unions grow as a key provider of community banking and meet the challenges posed by the changing domestic banking environment”.1

The key amendments include:

The Bill provides for the establishment of corporate credit unions as an additional regulated vehicle through which credit unions can collaborate. In essence, this amendment will permit a group of credit unions to take equity stakes in a new corporate entity enabling them to share resources and opportunities.  Furthermore, section 43 of the 1997 Act will be amended to extend the scope of investments that may be made by credit unions.2

A number of provisions in the Bill are designed to facilitate a greater focus by the board of directors on strategic planning in credit unions rather than operational issues. Changes which will affect the governance structure of credit unions are intended to redress the balance of responsibility on the board between directors and management. Examples of such provisions include:

- Reducing the minimum number of board meetings from ten to six per annum3;
- Reducing the frequency for approval of specified plans, policies and procedures from annually to every three years4; and
- Reducing the number of administrative issues to be mandatorily approved by the board of directors.5

The Bill also provides that credit union managers may be appointed to the board of directors.

4. Changes to the interest rate

Finally, the Bill proposes to amend section 38 of the 1997 Act to allow the Minister for Finance to set a maximum interest rate.6 As it stands, the interest rate is fixed at one per cent per month. It is anticipated that this change will provide more flexibility for credit unions to price risk in a rising interest rate environment.7

The Department of Finance’s Retail Banking Review reported in November 2022 and highlighted the greater role that credit unions could play in the provision of retail banking products and services in the coming years.8 This prospective role is particularly important in the context of the current retail banking market which contains a limited number of providers. The impending withdrawal of Ulster Bank and KBC Bank Ireland’s services from the market will leave a significant gap in the market for credit unions across the country to fill.

The credit union movement has a strong and trusted brand and has operated for years under legislation which has limited its ability to reach its potential. The Bill, if enacted, would be a welcome modernisation of the governing framework and further credit unions’ ability to become a one-stop-shop of for consumers’ daily banking needs.
We will continue to monitor and update on the development of the Bill.