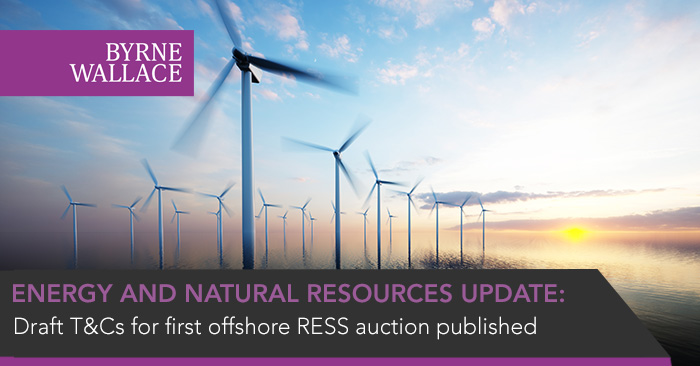 On 11 October 2021, the long awaited draft Terms and Conditions for the first Offshore Renewable Electricity Support Scheme auction (ORESS 1) were published. There now follows a consultation process, focussed on nine specific issues, which will run until 6 December, with publication of the final Terms and Conditions currently slated for Q2 2022.

It is an indication of the degree to which the regulatory framework for offshore wind farms in Irish waters is still very much in the ‘bedding down’ process that parties are advised that this ORESS consultation should be taken in conjunction with the ongoing grid assessment consultation being undertaken by the Commission for Regulation of Utilities. Parties are requested to seek to try to keep their feedback on the two consultations as independent of each other as possible.

Looking at the nine specific issues that are up for consultation in the immediate aftermath of the publication of the document, there are certain ones that stand out.

First amongst these is the eligibility criteria for projects to be able to compete in ORESS 1. Given that the enabling legislation to facilitate offshore development consent, the Maritime Area Planning (MAP) Bill, is not yet enacted, it is proposed that full planning permission will not be an eligibility criterion for entry to ORESS 1. Instead, Sate consent to occupy the relevant marine space will be an auction pre-requisite, be that in the form of a Maritime Area Consent (MAC) awarded under the MAP Bill as enacted, or a Foreshore Lease, awarded under the Foreshore Act 1933 (as amended). The timing of ORESS 1 is therefore critically dependent on the enactment of the MAP Bill and the commencement of relevant secondary legislation.  The removal of planning permission as an auction pre-requisite, when compared to the onshore Renewable Electricity Support Scheme (RESS) auctions, entails a certain level of risk to the State and to successful project owners, in a scenario where a successful project fails to achieve development consent and as a result does not proceed.

Another notable issue forming part of the consultation is that of indexation and the proposition that there are specific rationales for indexation in the offshore context.  Indexation was a thorny topic in RESS 1 (and continues to be for the forthcoming RESS 2 auction) where indexation was ultimately not a feature of the support and where bidders therefore factored anticipated cost inflation into their auction bids. Of interest is the suggestion for ORESS that, rather than indexing to general inflation indicators of CPI or HCIP, project costs may be more appropriately indexed against a more specific industry specific price level indicator such as the European Steel Index. The findings in the KPMG Indexation Report – also available on gov.ie – noted that a large number of developers regard indexation as a low priority issue, with their concerns more focussed on other factors such as grid policy and tenor of support. Funders on the other hand see indexation as a material consideration with them citing reasons such as the limited indexation financial hedging options available to them. It appears that a shared view emerged from a cohort of respondents that an absence of indexation may preclude many financial investors from investing in the Irish offshore wind industry. These financial investors might instead turn their focus to offshore markets in other jurisdictions where indexation is a feature of the support for offshore wind farms.

A third prominent issue forming part of the consultation are, as per RESS 1 and RESS 2, proposed interim and final milestones for ORESS 1 so as to encourage timely deployment and to safeguard against the potential hoarding of limited auctioned capacity. With the removal of development consent as an eligibility criterion for ORESS 1, this consent must be added as a post-auction milestone, and additional time provided to project owners to obtain this consent. A proposed timeline is published as part of the consultation with a proposed ORESS 1 longstop date in 2028.  There is passing reference to an assumed ORESS 2 longstop date in 2030. There is likely to be very little wriggle room in Ireland’s push to achieve its 2030 target of 70% renewable electricity (now increased to 80% per the recently published National Development Plan) and it is entirely conceivable we will enter the last couple of years of this decade significantly short of this target. Which will not necessarily come as a surprise to market participants that are increasingly voicing concern and frustration that Ireland appears to be falling off the trajectory required to achieve this target.

This article very much frames some initial thoughts and observations upon first sight of the consultation documents.  As ever, the devil is in the detail, and a busy two month period no doubt lies ahead as market participants focus on achieving the best possible playing field for Ireland’s first auction aimed at supporting offshore wind deployment in Irish waters.

For further information on ORESS 1, or general legal advice relating to any other aspect of renewable energy, contact Gavin Blake or any member of the ByrneWallace LLP Energy and Natural Resources Team.