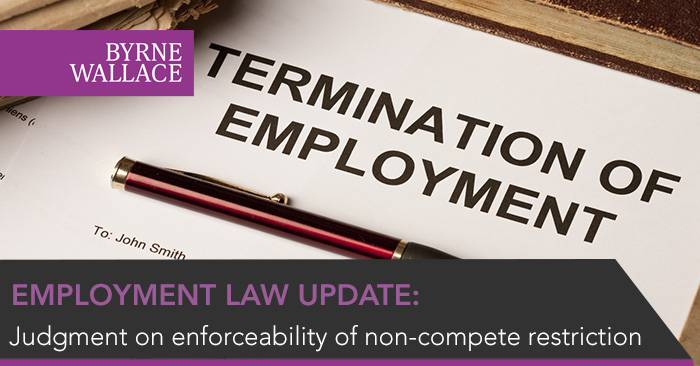 In the much anticipated judgment of Ryanair DAC v Peter Bellew [2019] IEHC 907, the High Court held that a covenant preventing Mr Bellew from being “employed, engaged, concerned or interested in any capacity” with “any business wholly or partly in competition” with Ryanair was void and unenforceable as an unjustified restraint of trade.

In December 2017, Mr Bellew commenced employment as Chief Operations Officer ("COO") for Ryanair Limited (as it then was), having previously worked for the company from 2006 to 2015. Mr Bellew's terms and conditions of employment as COO included a number of post termination restrictions which provided that for a period of 12 months after the termination of his employment, Mr Bellew could not, without prior written consent:

a.“be employed, engaged, concerned or interested in any capacity in any business wholly or partly in competition with the Company for air passenger services in any market”; or
b.“solicit or entice or endeavour to solicit or entice away from the Company any person who was employed within in (sic.) a senior executive, managerial, or technical capacity by the Company".

On 8 July 2019, Mr Bellew tendered his resignation and the parties agreed a termination date of 31 December 2019. On 17 July, Mr Bellew advised Ryanair that he had secured a new job as COO of easyJet and the following day, easyJet announced that Mr Bellew would be joining as COO as of 1 January 2020.

Decision: The restrictions on employment in “any business in competition” with Ryanair and “in any capacity” are too wide

In dealing with the enforceability of the restraint, the High Court noted that the first step was to assess whether Ryanair had established that the imposition of the restraint was justifiable, in principle, to protect its business “rather than to hobble Mr Bellew in the legitimate pursuit of his career”.

The Court accepted that Ryanair had a legitimate interest in protecting the valuable sensitive and confidential commercial, operational and financial information (which gives Ryanair its competitive edge), that came to Mr Bellew's knowledge in the course of his employment as COO. The High Court was satisfied that the nature and extent of the confidential information to which Mr Bellew had access would therefore justify a post termination restriction, in principle. The Court also had no difficulty with the time constraint of 12 months which was justified by the likely “useful” life of the confidential commercial information.

The High Court then had to determine whether the restraint was limited to the interest sought to be protected. While the Court was satisfied that Ryanair demonstrated the legitimate interest in protecting its confidential information from disclosure to its competitors in the low cost sector of the market, the Court was not satisfied that it demonstrated the same interest in relation to legacy or high cost airlines in circumstances where the restraint applied to all European airlines. The court concluded that the commercial information that Mr. Bellew had did not justify preventing him from taking up employment with a legacy or high cost airline. Accordingly, the restraint was found to be too wide.

The Court was also "troubled" by the prohibition on employment "in any capacity" with an alternative employer which, construed literally, would restrain Mr Bellew from taking up employment with another airline as a pilot or air steward. The Court commented that the legitimate interests of Ryanair might extend to restraining alternative employment at a rank immediately below Mr Bellew's rank of executive, but not to the rank below that. However, any attempt to construe the clause as applying only to certain “ranks” would be to "read down the clause", which is something the Court acknowledged it is not permitted to do. The fact that the restriction on solicitation of Ryanair employees was limited to certain capacities, namely persons employed within a senior executive, managerial, or technical capacity, compounded the issue.

For the aforementioned reasons, the Court determined that the post termination non-compete restriction was too wide and therefore was void and unenforceable as a restraint of trade.

This case also highlighted the need for employers to have both confidentiality and non-compete clauses in their employment contracts, with the Court noting that there are good reasons why a confidentiality clause is no substitute for a non-compete clause. Those reasons are dealt with in detail in the judgment and include (i) the difficulty in practice of enforcing a confidentiality clause (including the difficulty in drawing a line between information which is confidential and information is not) and (ii) the distinction between breach of confidence and competition.  Situations may arise in which sensitive commercial information is obtained by an employee in the course of his/her previous employment, which can be valuable to a competitor, and can be deployed without necessarily disclosing it. For example, an executive's knowledge of agreements previously made with a supplier would allow him/her to adopt a particular negotiating position on behalf of a new employer without expressly disclosing the fact or terms of a previous agreement made by a former employer.

For further information or advice, please contact Lorraine Smyth, Ciara Lennon or any member of the ByrneWallace Employment Law team.To register for ByrneWallace updates click here, and follow us on LinkedIn.