The financial thresholds for Irish merger control set out in section 18(1) of the Competition Act 2002 (as amended) (the “Act”) have been increased by Ministerial Order.1  From 1 January 2019 mergers and acquisitions will be notifiable to the Competition and Consumer Protection Commission (“CCPC”) where both of the following thresholds are met:

All notifiable mergers must be cleared by the CCPC prior to completion and any transactions notified before the end of 2018 will be subject to the current thresholds. The 2-3 month gap between the publication of the new thresholds and their implementation gives time to the parties and their legal advisers to transition to the new regime.

These revised thresholds result from a public consultation on the merger provisions of the Act, carried out by the Department of Business, Enterprise and Innovation (“DBEI”) at the end of 2017. Since the introduction of the current thresholds in 2014, there has been a perception among the business community that the thresholds effectively resulted in an additional “tax” on transactions due to the cost, resources and uncertainty involved, even where transactions did not have a substantial effect on competition. The consultation sought to review the financial thresholds (including the individual turnover thresholds for parties, the aggregate turnover thresholds for both), and the number of "working days" for CCPC to review merger control cases.

The table below indicates the significant increase in merger notifications under the current regime: 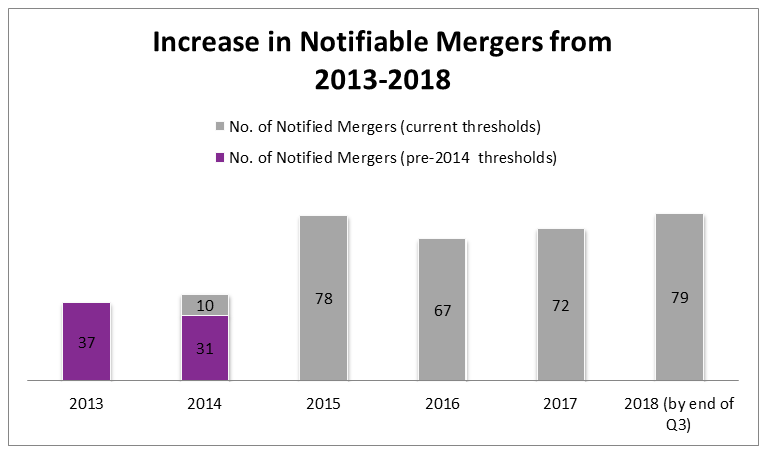 Implications of these Changes

The changes in the financial thresholds are therefore welcome. In particular, commonly notifiable acquisitions of individual retail units, petrol stations and hotels will no longer be caught where those targets have a turnover of €3 million - €10 million.

A reduction in the number of notifiable mergers should also assist the CCPC in focusing its resources on those mergers that are more likely to have a substantive effect on competition and an impact on consumers. The DBEI consultation noted that had the second threshold been at the newly adopted level in 2015 and 2016, there would have been on aggregate 51 fewer notifications. That would have meant that:

The new thresholds bring Ireland more in line with jurisdictions of a similar size, such as Denmark, Finland and Czech Republic. The higher thresholds will also be welcomed by international and national commercial operators who wish to expand their businesses through acquisitions in Ireland.