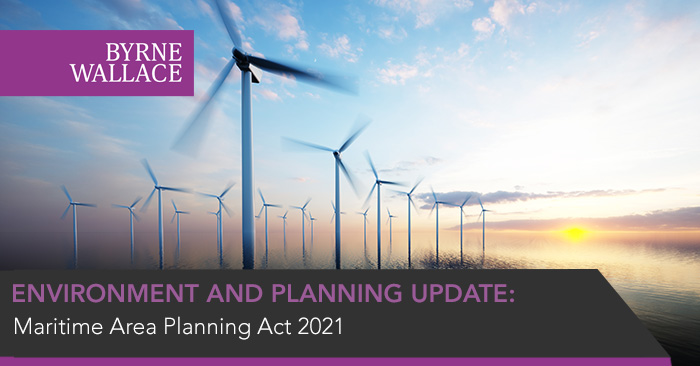 On 23 December 2021, the President of Ireland signed into law ground-breaking new legislation, which it is hoped will underpin the rapid deployment of offshore wind turbines in Irish waters over the coming years. The legislation takes the form of the Maritime Area Planning Act 2021 (the “MAP Act”) and has been eagerly awaited by the Irish renewables industry after several years in development. It supplants old legislation going back to the 1930’s and which was clearly no longer fit for purpose, in the fact of technological advances in the sphere of offshore renewable electricity production.

Whilst the MAP Act is not solely applicable to offshore renewable energy projects, and is designed to apply to various types and sizes of maritime projects from harvesting of seaweed to the likes of gas storage, it will undoubtedly play a critical role in Ireland seeking to achieve its target of 80% renewable electricity by 2030, with the Government, per the Climate Action Plan, envisaging that offshore wind farms will be a major contributor.

In essence, the MAP Act provides that henceforth there will be two separate key consents required for the development of an offshore renewable energy project. The first consent is the legal right to occupy a particular area with the maritime area (effectively a lease of the seabed) and is called a Maritime Area Consent (“MAC”). The MAC is seen as being the ‘gateway’ to procuring the second key consent, insofar as holding a valid MAC is a pre-requisite for a developer before seeking development permission. Development permission shall be sought under the Planning and Development Act 2000, which has been amended under the MAP Act so that it now specifically caters for the consenting of renewable energy projects in Irish waters.

The MAP Act also provides for the establishment of the Maritime Area Regulatory Authority (“MARA”), which will be responsible for the granting of MACs, licences and the enforcement of this newly established regulatory regime.  It is anticipated that the MARA will come into existence in Q1 2023.  Prior to that, the Minister for Environment, Climate and Communications (the “Minister”) shall have the authority to grant MACs to legacy projects (referred to in the MAP Act as ‘Special MAC Cases’) which are projects that meet one of the following criteria: (i) have been the subject of an application for a foreshore authorisation made but not determined, abandoned or withdrawn before 31 December 2019; (ii) are the subject of an existing foreshore authorisation; and/or (iii) are the subject of a valid grid connection agreement, or confirmation of eligibility to receive a grid connection offer, before 31 December 2019.

Marine planning in Ireland to date has been developer-led, similar to the UK. The MAP Act changes this so that marine planning will gradually become plan-led, thereby having similarities with the Netherlands. The abovementioned Phase Three projects will be developed at strategic locations selected on the basis of ORDEP2 (the anticipated new Offshore Renewable Energy Development Plan), Designated Maritime Area Plans (as provided for within the MAP Act and being sites that are designated for particular maritime usages) and marine spatial planning in accordance with the Maritime Spatial Planning Directive (2014/89/EU). Ireland’s first marine spatial plan, the National Marine Planning Framework (“NMPF”), was published on 30 June 2021. Public bodies that perform functions in relations to developments in the offshore area must comply with the NMPF when carrying out their functions and the NMPF is to be used as a key consideration for decision makers on all marine authorisations.

In summary, the MAP Act represents an integral component if Ireland is to achieve its ambitious 80% renewable electricity target, as set out in the Government’s Climate Action Plan, as updated in 2021. It runs to some 260 pages and there will undoubtedly be a bedding in process as the legislation is ‘stress-tested’ by the ever-building pipeline of potential offshore projects that shall fall within its remit. Secondary legislation will most likely follow in early course, and is provided for and envisaged under the MAP Act, and consultations are already underway with respect to MAC Assessment for Phase One projects and the treatment of Phase Two projects. The goal is that the collective outcome will be a streamlined, expeditious consenting regime – with the MAP Act at its core – which, in the first instance, enables Ireland to move from having 25MW of offshore wind capacity at present, to 5GW by 2030. Undoubtedly very challenging – and hence why the belated enacted of this legislation was so keenly awaited by energy sector stakeholders.

For further information on the MAP Act 2021 and other climate action measures, or general legal advice on this topic, contact Gavin Blake or any member of the ByrneWallace LLP Environment and Planning Team.