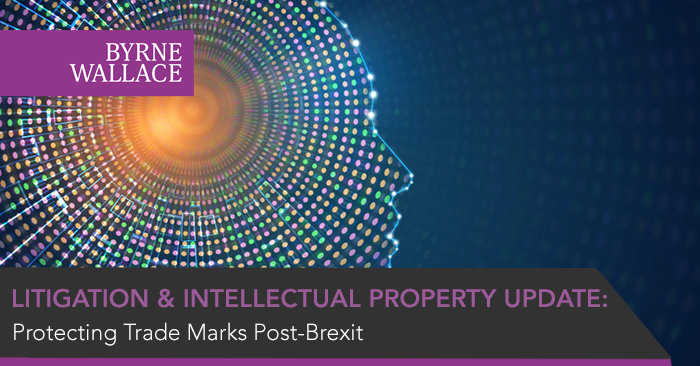 The withdrawal of the UK from the EU will have a significant impact on how Intellectual Property rights and obligations are managed post-Brexit including in relation to the protection and enforcement of registered trade marks within the EU.

The Withdrawal Agreement between the UK and the EU provided for an “implementation period” (due to expire on 31 December 2020) designed to mitigate the effects of Brexit by allowing the EU and the UK to engage in discussions and agree a framework on the future relationship between the UK and the EU. During the implementation period, most EU law continues to apply to the UK as if it were still an EU member state along with all of the usual EU supervisory, judiciary and enforcement mechanisms.

In relation to Intellectual Property, and specifically trade marks, the Withdrawal Agreement seeks to prevent any loss of rights that would otherwise flow from the UK's departure from the EU by extending the application of EU trade mark law and the Recast Brussels Regulations for the duration of the implementation period.

So what effect will Brexit have on the existing protections afforded to holders of registered trade marks?

Currently, the EU Trade Mark Regulations1 afford the holders of a registered EU trade mark (“EUTM”) with protection in each country of the EU. EUTMs are enforceable under domestic legislation throughout the EU making it easier and more cost effective to police and enforce these IP rights in the EU. The position remains the same in the UK for the duration of the implementation period.

From 31 December 2020 (“implementation period completion day” or “IP completion day”)2 the EU Trade Mark Regulations will no longer apply in the UK, thus removing the protections afforded to EUTMs in the UK.

Where an opponent to an application to register a trade mark in the UK is asserting use of an existing trade mark within the proceeding five year period, if the five years expires during the implementation period the opponent may rely on genuine use made of the comparable mark when it was an EUTM or international mark, in any EU member states as well as in the UK. This may give rise to a situation where genuine use is proven in UK opposition proceedings even though the mark relied on was never previously used in the UK.

Enforcement throughout the EU

Following IP completion day the Recast Brussels Regulation5 (the “Regulations”) will no longer apply to the UK. Pursuant to the Regulations, EU member states are subject to strict rules governing jurisdiction of the courts and the enforcement of civil and commercial matters (including the enforcement of trade marks) within the EU.

The Regulations provide that in proceedings regarding the registration or validity of trade marks, the courts of the member state in which the registration was applied for shall have exclusive jurisdiction regardless of the domicile of the parties. This will no longer be the case in respect of the UK following IP completion day.

As a member state of the EU, the UK was also a party to the Lugano Convention6 which mirrors the terms of the Brussels Regulations regarding the jurisdiction for disputes relating to registered trade marks7. However, with the UK ceasing to be a member of the EU the Lugano Convention no longer applies to the UK.

This lack of clarity around jurisdiction is likely to create significant disruption and uncertainty in relation to cross-border litigation and in particular the enforceability in the UK of any EUTMs.

In an attempt to avoid widespread disruption the UK formally applied to independently accede to the Lugano Convention on 8 April 2020. However, the UK’s application to accede will only be accepted on the unanimous agreement of the other contracting parties to the convention within 1 year of the application. Therefore, the UK’s ability to accede to the Lugano Convention is likely to be impacted by its dealings with the EU prior to IP completion day.

From the non-contentious perspective it is important to ensure that any license agreements regarding the use of registered trade marks take appropriate account of the impact of Brexit, in particular, the concept of a comparable trade mark and the uncertainty around jurisdiction.

Non-UK governed contracts referencing a EUTM should ensure that the provisions of the agreement (including any limitations on use of the mark) account for the existence of the corresponding comparable trade mark.

In relation to the jurisdiction clause in any license agreement, selecting the UK as the exclusive jurisdiction to settle disputes should be considered due to the potential difficulties of European wide enforcement of judgements post-Brexit.

If you wish to discuss any of the issues raised in this article, please contact Mark O'Shaughnessy, Jon Legorburu or Billy Casserly of our Litigation and Dispute Resolution team or Colin Sainsbury of our Intellectual Property team, or your usual ByrneWallace contact.