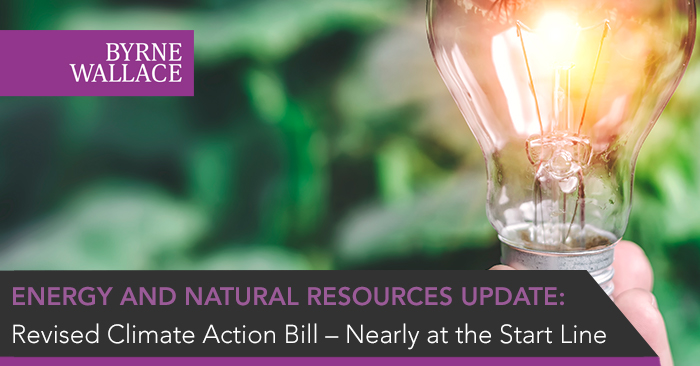 There has been widespread acknowledgement that the revised draft of the Climate Action Bill (Climate Action and Low Carbon Development (Amendment) Bill 2021), published by the Government on 23 March, goes a long way to addressing perceived weaknesses in the previous draft published last autumn.  As ever, despite these improvements, there are those who claim that the Bill still does not do enough, whereas others feel that the challenging targets therein may not be achievable. What remains clear and undisputed however, is that the framework set out in the revised Bill has the potential to transform every sector of the economy and to impact on the day-to-day lives of every Irish citizen.

To re-cap, the main purpose of the Bill is to support Ireland’s transition to ‘Net Zero’ and achieve a climate neutral economy by no later than 2050. This very ambitious goal is underpinned by the following key elements of the (revised) Bill:

As part of the publication of the revised Bill, the Government has once again pointed to the fact that no other country has enshrined into law as steep and ambitious a decarbonisation trajectory as is provided for in the Bill.  That said, when one looks at how poorly Ireland fared in seeking to achieve its EU greenhouse gas emissions reduction target for 2020 (leading to then Taoiseach Leo Varadkar labelling Ireland a climate “laggard” in 2018), one sees the necessity of endeavouring to play catch up with our European neighbours. The bottom line is that Ireland is a wealthy, ‘First World’ country that has failed to do its fair share to date in terms of battling greenhouse gas emissions. With one of the ‘improvements’ contained in the revised Bill being a 51% reduction in greenhouse gas emissions by 2030, this can no longer be put on the long finger at Government level.

The hope now is that the revised Bill makes a swift passage through the legislative process and that it is enacted as soon as possible. Once enacted, the ball will very much be in the court of the Government (and society as a whole for that matter) to deliver decarbonisation at a rate not previously seen, through delivering upon the legally binding targets and commitments in the Bill. The revamped Climate Change Advisory Council, under its recently appointed new chair Marie Donnelly, will also have a key role to play in advising the Government on the new system of ‘carbon budgets’ that is to be introduced. The fact that these carbon budgets explicitly cover the whole economy and all greenhouse gas emissions in the Republic of Ireland, means that immediate attention will need to be focussed on the high emitting agriculture and transport sectors and on agreeing emission ceilings for these sectors as part of the overall ‘pollution pie’.

Hard yards will imminently need to be gained at Government level, as it engages in wide consultation across the various sectors of the economy with a view to achieving collective buy-in, all framed against transparent timelines in the soon to be enacted legislation.

For further information on the Bill and other climate action measures, or general legal advice on this topic, contact Gavin Blake or any member of the ByrneWallace Energy and Natural Resources Team.