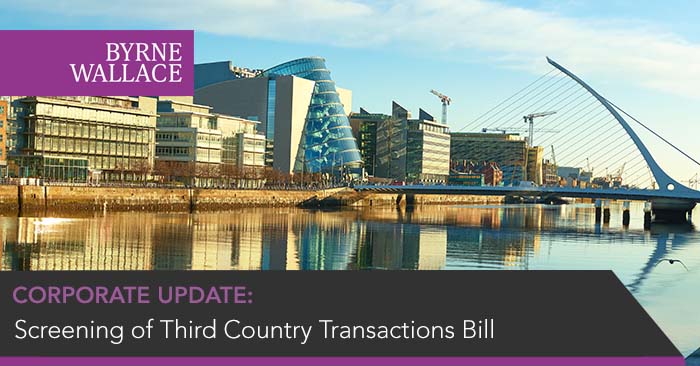 Ireland does not currently screen foreign direct investment (“FDI”). This is soon to change with the upcoming publication of the Screening of Third Country Transactions Bill (the “Bill”), which is set to be put before the Oireachtas in the coming months. The Bill is the means through which Ireland will implement EU Regulation 2019/452 (the “EU Regulation”), which relates to the screening of FDI across the EU.

While the final text of the proposed Bill is not yet available, it is clear that the Bill will introduce Ireland’s first investment screening regime in relation to investments from “third countries”. These are countries outside of the EU, which will include some of Ireland’s key sources of inward investment such as the UK and the US.

The Bill will empower the Minister for Enterprise, Trade and Employment (the “Minister”) to screen transactions involving the acquisition of interests in Irish entities which the Minister reasonably believes could pose a threat to Ireland’s national security.

The government’s recent press release noted that “third country investments in technologies identified in law as ‘sensitive’ or ‘critical’ infrastructure such as our health services, our electricity grid, military infrastructure, ports and airports will be screened”. The currently proposed transaction value threshold is set at €2 million but this will be reviewed and can be revised by the Minister if required.

Failure by a company to co-operate with the screening requirements could result in penalties, including fines of up to €4 million or imprisonment.

Minister Leo Varadkar TD noted that the Bill will “give us the power to intervene if a non-EU actor is seeking to make an investment which would threaten our security or public order. Other EU countries are introducing similar legislation, so we will be able to better act in co-operation with them”.

While the Bill has been in development for some time, its details raise a number of questions, which include:-

The introduction of the Bill will bring about a significant change in Ireland’s FDI regime. The Irish government is keen to emphasise that Ireland remains open for business as an attractive place to invest. However, once the Bill becomes law, both foreign investors and Irish target companies will need to ensure that they consider the implications of the Bill in planning their transactions. The model which the government will elect to advance the aims underpinning the legislation also remains to be seen.

FDI is a linchpin of the Irish economy, accounting for over 70% of Irish export sales and corporation tax revenues and 20% of private sector employment. It remains to be seen whether the Bill will negatively impact FDI-related mergers, acquisitions and investments or if it will be just another step to be considered in transaction planning.

For further information in relation to this topic, please contact Feargal Brennan, managing partner and head of Corporate, or Emmet Connolly, associate in the Corporate Department.