VIEW ALL
Publications & Insights Another first for ByrneWallace
Share This

Another first for ByrneWallace 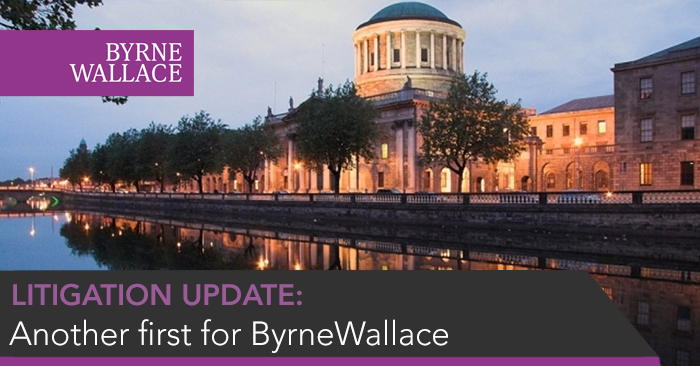 This online facility is part of a broader Courts Service initiative to improve the efficiency and the effectiveness of the court process and to ensure that the methods by which they can be assessed by the public are fit for purpose in the digital age. In 2016, the Supreme Court, in Lanigan v Barry, conducted the hearing of this appeal using the eCourt App where the documents were scanned and uploaded to tablets instead of using multiple books containing the pleadings and other court documents.

The Courts Service Strategic Plan 2017 to 2020 identifies as a strategic priority optimising the use of technology – a priority reinforced by the Chief Justice, Mr Justice Clarke in his remarks launching the Courts Service 2018 Annual Report in July 2019. Mr Justice Clarke stated that “projects including electronic filing of documents, online access to court registers, and systems to enable online payment, will hopefully lead to a significant improvement in the way in which we all work and deliver services to the community”. He further stated that, “in a changing world, we must ensure that the courts of Ireland continue to maintain our reputation for competency and efficiency as we deal with over 400,000 criminal, and 200,000 civil matters annually”. The Courts Service has invested in a new ICT platform to allow for the filing of Applications as a starting point for future online filings in general.

Ireland’s reforms in this area mirror changes made in other jurisdictions where e-filing is increasingly becoming the norm. In England and Wales e-filing is compulsory in many High Court cases such as the Business and Property Courts (which hears High Court commercial cases), and the Queen’s Bench Division cases (which hears personal injury, negligence, breach of contract and human rights matters). E-filing is also commonplace in the Court of Justice of the European Union, and is now mandatory for proceedings before the General Court (where the majority of EU cases are heard in the first instance) and remains optional in proceedings before the Court of Justice.