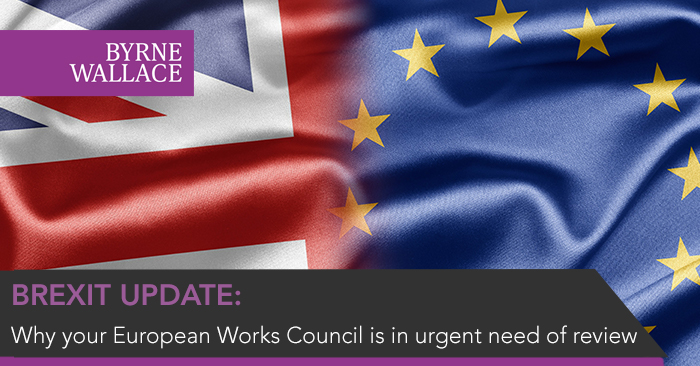 Multinational companies with established European Works Councils (“EWCs") need to review their EWC arrangements and consider their amendment in advance of the expiration of the Brexit transition period on 31 December 2020.

EWCs are bodies established pursuant to the European Works Councils Directive. This EU legislation creates an obligation for multinational employers with a presence in two or more States within the European Economic Area to establish transnational information and consultation mechanisms in certain circumstances. The legislation provides that no action need be taken by an employer unless a minimum of 150 employees across two or more relevant States in which the employer is established trigger the process to create an EWC. However, many multinational companies have been proactive and created European Works Councils without waiting for prompting by employees. In other cases, the establishment of the EWC has taken place through negotiation with a so-called "Special Negotiating Body" as provided for in the legislation. The resulting EWC is the structure through which employers can consult with employee representatives about certain matters that affect the business on a pan-European basis.

How will Brexit impact our EWC?

The United Kingdom exited the European Union on 31 January 2020 and became what is known as a “third country" to the EU. The exit terms – outlined in the EU-UK Withdrawal Agreement – provide that until 31 December 2020, EU law continues to apply to the UK.  However, after that date, unless alternative arrangements are made between now and then, the European Works Councils Directive will no longer apply to the UK. This event will have a range of possible consequences for multinational companies.

The European Commission has issued a notification to stakeholders stating that it is highly recommended to amend such agreements and stipulate explicitly the law of a Member State for the EWC for the sake of clarity and legal certainty.

What about EWCs of companies with employer representatives based elsewhere but with a significant presence in the UK?

UK-based EWCs are not the only scenario to be considered in the context of Brexit. Multinational companies with significant numbers of employees in the UK may also find that they are impacted by the change in status of the UK, even if the central management or representative agent is based elsewhere. The end of the transition period, with its sudden disapplication of the Directive to what may be a significant number of employees based in the UK, may lead to a significant change of the structure of a ‘Community-scale undertaking’ or a ‘Community-scale group of undertakings’ for the purpose of the Directive, as well as impacting upon the functioning of established European Works Councils. For existing agreements, there may be a need to introduce changes in order to take the above-mentioned consequences into account. The Directive provides a procedure for amending agreements in the absence of adaptation provisions established by the agreements in force. However, it is recommended that companies seek professional advice when there are varying agreements grounding the operation of EWCs.

Our EWC has little interest from employees – is there need for review at this point?

EWCs are often misconstrued as vehicles through which large scale negotiations on terms and conditions of employment can be conducted. In fact, the negotiation of collective issues through EWCs is not envisaged by the legislation. The specific remit of an EWC normally relates to far less exciting matters, such as trends in employment, investment trends and the introduction of new working methods. As a result, an EWC can often become dormant, with little interest from staff or management. However, in times of economic crisis, the remit of an EWC can become very topical, because it includes consultation on matters such as cuts-backs, closures and collective redundancies.

Furthermore, EWCs are often viewed as a conduit through which many kinds of matters can be raised, even matters that nominally fall outside of the formal remit of EWCs. This can result in the escalation of disputes on matters such as pay rates, pensions, shift patterns and other terms and conditions, particularly where there are differences between establishment company’s operations in different member states. Multinational employers can find themselves embroiled in the industrial relations framework and engaging with trade unions within the jurisdiction in which their EWC’s central management is based.

Review of the EWC is now necessary to ensure that each affected company at least has knowledge of the legal framework within which they will be operating in the event that any dispute arises 1 January next.

What to do next.

If your company has a UK-based EWC or has a significant number of employees in the UK, it is time to consider the potential impact of the 31 December 2020 date on its operation. Moving the EWC to Ireland is a preferred option for many companies who previously based their EWCs in the UK, due to

ByrneWallace solicitors specialise in advising multinational organisations on worker participation, including the establishment and coordination of local information and consultation arrangements, European Works Councils. Our solicitors’ previous engagement in the crafting of the applicable legislation in Ireland makes us uniquely placed to support employers in this niche area.