Business Interruption Insurance - Assessment and Impact of the FBD Decision 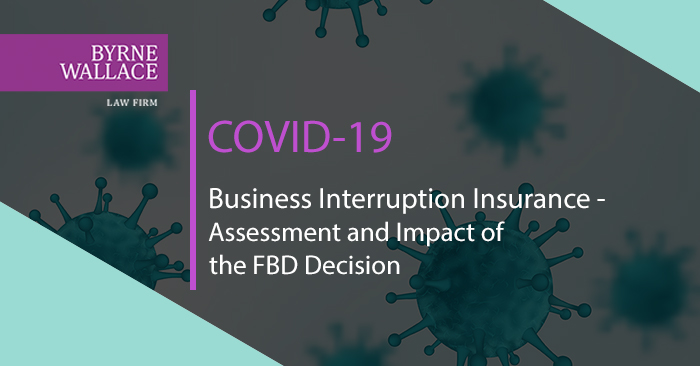 The Irish High Court has found in favour of four pub owners who challenged FBD’s refusal to indemnify them under their business interruption (BI) insurance policies.

This Irish judgment when combined with the decision of the UK Supreme Court in the Financial Conduct Authority’s test case will have a significant impact on how insurers manage BI insurance claims arising from Covid-19.

Given certain key decisions made by both Courts in relation to central aspects of these types of policies, the expectation is that more SMEs will now be entitled to a payment from their insurer and that these payments are likely to be at a higher level than previously expected.

In his detailed judgment delivered on 5 February 2021, Justice Denis McDonald in the Commercial division of the High Court held the pub owners were entitled to be compensated by FBD for financial losses associated with the closure of their businesses because of the Covid-19 pandemic.

The FBD judgment crystallises key findings from the UK Financial Conduct Authority’s (FCA) test case into Irish case law. Critically, Justice McDonald’s judgment upholds the reversal of the Orient Express1 case and the renewed analysis of the “but for” test, together with interpreting broadly the presence of Covid-19 to trigger an insuring clause with a specified geographical area. We previously analysed the UK Supreme Court judgment in our article of 20 January 2021.

The quantification of the actual losses suffered by these pubs has yet to be determined and the case is listed before the Court again on 17 February 2021.

The impact of this judgment will have far reaching ramifications, not only for circa 1300 FBD customers with BI insurance but for all SMEs in Ireland holding similarly worded policies with different insurers.

Certain SMEs are likely to have a renewed expectation that their claims will be indemnified without further delay. The Minister of State with responsibility for Financial Services, Seán Fleming has emphasised the importance for all insurers offering BI insurance to carefully assess this judgment and how it may impact upon their policies. While the merits of each case will turn on the wording in each policy, SMEs will have renewed confidence in submitting or re-submitting their claims in light of this judgment.

The Central Bank of Ireland last year published the “Covid-19 and Business Interruption Insurance Supervisory Framework”, setting out what it expects from insurers when dealing with claims arising under BI insurance policies as a result of Covid-19; how it intends to engage with the insurers and the overall approach to supervision and escalation of any issues identified. Following on from this, a statement released by the Central Bank said it “welcomes the judgement of the High Court in respect of the test case on Business Interruption Insurance. We will be closely examining the potential impact of this judgement for customers in the context of our sustained and ongoing engagement with relevant firms”.

Táinaiste Leo Varadkar has said that there may well be a role for the Central Bank, as the financial regulator, in making sure businesses receive the pay-outs that they are entitled to. Sinn Fein’s Pearse Doherty has called on the Central Bank to begin an investigation, with a view to possible administrative sanctions. He drew a parallel with the banks’ tracker mortgage scandal where a financial institution looked on its contracts in strict legal terms rather than a consumer appropriate and consumer friendly approach.

From a wider European context, Gabriel Bernadino, the Chair of an EU watchdog for the insurance sector (EIOPA) has recently said that insurance regulation should be removed from member states and handed to a powerful bloc-wide body that can push through reforms such as simpler information for policyholders. He said that current disclosures to policyholders fails to meet their intended aims, “They remain too complex, burdensome and are usually not lead by consumers”. The Chair also called for a “profound reassessment” of regulation.

What happens next in Ireland remains to be seen but it is certain that there will now follow a period of reflection, review and possible investigation into how, not only BI policies but the range of policies covering all insurable losses and their regulation needs to shift to achieve a more consumer focused and transparent co-existence between insurer and insured.

KEY ASPECTS OF THE JUDGMENT

1.1 The dispute centred on a key clause in FBD’s policies that stated it would indemnify the pubs for losses:

1.2 The Court referred to the three constituent part clause as the “composite peril” that would trigger cover.

1.3 The insurer argued for a very strict interpretation of that “composite peril” in seeking to decline cover asserting that because the imposed closures resulted from outbreaks both outside as well as inside a 25 mile radius of the premises, the pubs could not recover their losses under the policies. They also argued that the policy did not provide pandemic cover and had been designed and priced to cover “standard foreseeable risks and not those associated with extraordinary events” such as Covid-19.

1.4 The Court disagreed and further rejected FBD’s assertion that because the pandemic was not an ”event” or single occurrence but rather a series of occurrences or outbreaks, the pubs’ indemnity was declined. The Court determined that an event can also be a “state of affairs” such as the occurrence of a pandemic

1.5 Solicitors for the plaintiffs told the Court that the clause at issue should be given its ordinary meaning and further highlighted the complete absence of any exclusion of pandemics in the relevant policies and that on a proper interpretation therefore, the clause covered the losses incurred as a result of Covid-19.

2.1 In seeking to interpret the causative factors that would trigger insurance cover in these policies the Court examined the “but for” test and interpreted it in favour of the pub owners. While it was recognised that the only losses insured under the policies were those which would not have been suffered “but for” the closure of the premises following an outbreak within 25 miles, FBD argued that a substantial part of the losses claimed by the pubs would have occurred in any event due to changes in societal behaviour that resulted from the pandemic such as social distancing, general fear of congregation and travel restrictions (uninsured losses).

2.2 FBD argued that in contrast to the Financial Conduct Authority case in the UK, where the Court there took the view that “disaggregation” or splitting out the losses of this kind was not possible, it claimed the Court now had the benefit of months of evidence which would render the task possible. The Court rejected the argument and decided it was not possible to separate out the effect of one loss (insured) from the effects of another (uninsured) when both were so inextricably aligned and decided to apply a modified version of the “but for” test to ensure that it was not “applied in an unduly mechanical way which could give rise to manifest injustice”.

3.1 The Court rejected the pub’s claim that they are entitled, by reference to the definition of the indemnity period in the FBD policy, to maintain a claim against FBD for the continuing effects of the Covid-19 pandemic on their business, even after any period of imposed closure comes to an end. However, they were entitled, the Court held, to be indemnified for such losses until the losses ceased or the indemnity period comes to an end (whichever was the earlier). Arguably therefore, it could be open to such business interruption policy holders to prove that any losses which may continue after the period of business closure ends, are directly related to the effects of the business closure itself.

4.1 FBD has confirmed that it does not intend to appeal the decision and said the judgment has provided “much needed clarity” confirming that the company will “endeavour to process claims as quickly as possible” and make interim payments to policyholders in advance of a final decision by the Court on the precise quantum of losses suffered.

4.2 The court has listed the hearing remotely for mention on 17 February 2021 at which time it will direct the parties to give consideration to the terms of the orders to be made on foot of this judgment.