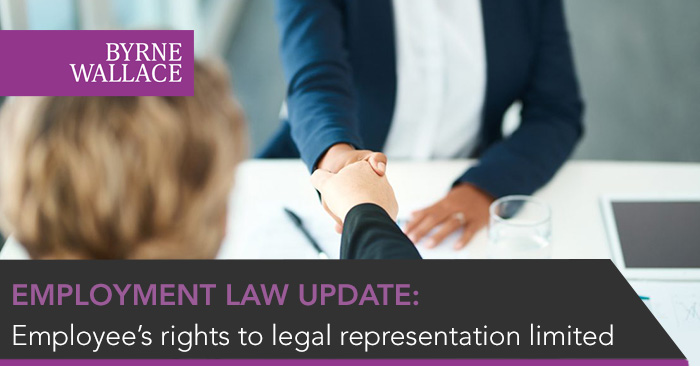 The Supreme Court found that the ultimate issue which a court has to determine in a case such as this is whether disciplinary proceedings continuing without legal representation would amount to unfair proceedings and be in breach of the implied term as to fairness. Clarke CJ stated that it follows that such a breach could only be established where it can be shown that legal representation is "necessary" to ensure a fair process. To say that a case might be somewhat better presented by a lawyer falls a long way short of saying that the presence of a lawyer is necessitated in order for the process to be fair.

The Supreme Court confirmed that the principles established in Burns and Hartigan v Governor of Castlerea Prison [2009] represent the law concerning the entitlement to have legal representation at a disciplinary process.  Clarke CJ was satisfied that “the observation to be found in the judgment in Burns to the effect that legal representation will only be required as a matter of fairness in exceptional cases provides overall guidance to the proper approach”.

Clarke CJ referred to the various considerations identified in Burns, which include the seriousness of the charge and the proposed penalty, whether any points of law are likely to arise, the capacity of the person to present his or her own case, procedural difficulty, the need for reasonable speed in making the adjudication and the need for fairness between the parties. He found that these are not matters which need to be separately established, but rather they are factors which should be taken into account as part of an overall assessment as to whether a fair process can take place without legal representation.

The Supreme Court also considered the appropriateness of a court intervening before or during a disciplinary process.  In this regard, Clarke CJ referred to his decision in Rowland v An Post [2017], in which he said "courts should be reluctant to intervene while a disciplinary process is ongoing but rather should wait until the process has come to an end and then decide whether the result of that process is sustainable in law.” There will be an exception to this general principle in cases where it is clear that the process has "gone off the rails" to the extent that there is no reasonable prospect that the ultimate determination could be sustainable in law. Where cases have “gone off the rails” then the courts may intervene even before the disciplinary process has been completed.

A charge can be serious – or even criminal – without being “exceptional”

The mere fact that Mr McKelvey was accused (in the disciplinary investigation) of behaviour that also amounted to a criminal offence – namely “theft” – was not in itself sufficient to create a right to legal representation because “any result of this disciplinary process could have no bearing on a criminal trial where the guilt of an accused would need to be established beyond reasonable doubt.”

Clarke CJ stated that the allegation against Mr McKelvey is relatively straightforward and that he cannot see anything in the allegations, the evidence or the procedures to be followed which would "place these disciplinary proceedings beyond the competence of an experienced trade union official".  He stated that, while this is an allegation of theft and the disciplinary process could result in dismissal, this is certainly a factor to be considered but does not, of itself, bring the case into a category where it can be shown that legal representation is necessitated.

The Court found that there was nothing in the evidence in this case that would satisfy a court that representation by an experienced trade union official would not be adequate to secure a fair process.

What does this decision mean for employers

The Supreme Court confirms for employers that, only in exceptional cases, will an employee be entitled to legal representation in a disciplinary process.

The McKelvey case does not address the difficult issue of the extent to which employees in disciplinary processes have a right to cross-examine witnesses. There is conflicting case-law on this subject. The question of cross-examination did not arise in this case because Irish Rail’s procedures gave Mr McKelvey an opportunity to cross-examine witnesses. However, Clarke CJ may have given an insight into the view of the Supreme Court on this question when he said: "an internal disciplinary process such as this is not a criminal trial. While the process must be fair, the formal rules of evidence or the procedures which govern either criminal or civil proceedings do not necessarily apply. ... What is required is that Mr. McKelvey and his trade union representative be given a reasonable opportunity to challenge the evidence of any such persons on any reasonable basis.”

These comments may imply that, while employees must be given a fair opportunity to challenge evidence, such opportunity might not necessarily be in the form of courtroom-style cross-examination. However, those comments are not part of the legally binding part of the McKelvey decision. The outstanding questions about cross-examination are ones that will be answered by future decisions of the courts.

For further information or advice, please contact Loughlin Deegan, Roisin Lawler or any member of the ByrneWallace Employment Law team.To register for ByrneWallace updates click here, and follow us on LinkedIn.