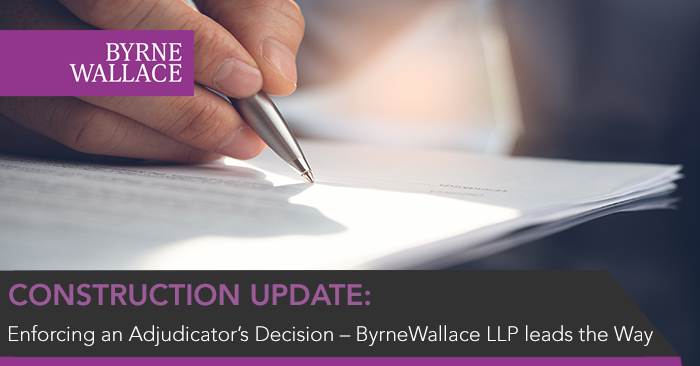 Total Highway Maintenance Limited (“THM”) were appointed as the main contractor for certain Irish Rail works at Inchicore, Dublin 8. THM appointed our client, Gravity Construction Limited (“Gravity”), as its roofing and cladding sub-contractor under a sub-contract dated 09 October 2019. The initial dispute arose between the parties in relation to an interim payment application submitted by Gravity in December 2019. THM certified the payment application at less than 10% of the value applied for and Gravity disputed THM’s assessment. Gravity referred the dispute to adjudication pursuant to section 6 of the Construction Contracts Act 2013 (“CCA 2013”) in March 2020.

THM subsequently refused to discharge the sum awarded by the Adjudicator to Gravity and sought to refer the dispute, relating to the adjudication, to arbitration under the sub-contract. THM contested that the sums were not payable due to the fact that it had commenced arbitration proceedings. Gravity rejected this perspective and maintained that the amount due to it was payable in the interim, until a different decision was reached by referral to arbitration or proceedings in court. This was on the basis of section 6(10) of the CCA 2013 which provides:

On 03 July 2020, Gravity commenced enforcement proceedings in the High Court seeking to enforce the adjudicator’s decision pursuant to section 6(11) of the CCA 2013 and Order 56B of the Rules of the Superior Courts. Order 56B was added to the Rules of the Superior Court, following the introduction of the CCA 2013, to provide a mechanism for enforcing an adjudicator’s decision in the High Court. Counsel engaged on behalf of Gravity were John Trainor SC and Deirdre Ni Fhloinn BL.
On 29 July 2020, THM issued an application in the High Court seeking a stay of Gravity’s enforcement proceedings to arbitration. Amongst other matters, THM argued that Gravity could not enforce the adjudicator’s decision where a dispute had been referred to arbitration. This application pushed the hearing date for both applications back to 26 January 2021.

The proceedings came before Mr Justice Garret Simons for hearing on 26 January 2021.

THM had, at this point, in effect conceded the proceedings and offered no defence against Gravity’s claims. This meant that it was also not pursuing its application to stay the proceedings to arbitration.  THM sought to have the matter adjourned for two weeks in order to allow them to pay Gravity the amounts sought. Given the conduct of the proceedings, length of time since the initial payment application in December 2019 and the adjudicator’s decision in April 2020, Gravity wished to obtain an order against THM requiring them to pay the amounts sought in its application. Simons J, finding a compromise between the parties and not desiring to adjourn the matter in a case where THM offered no defence, gave an “unless” order. This meant that unless THM paid all monies due to Gravity within 7 days, an order would be made against it enforcing the decision of the adjudicator. Simons J also ruled that costs were to be borne by THM on a party to party basis, save for some elements in relation to certain legal submissions and pleadings.

Simons J took the opportunity to give written reasoning behind his decision. He opens his decision by noting that adjudicator’s decisions are binding pursuant to section 6(10) of the 2013 Act. He also dealt with a number of issues including consideration of the requirements for effective Calderbank letters, considerations in respect of costs under the Legal Services Regulation Act 2015 and enforcement of an adjudicator’s decision under the CCA 2013.

In ordering that costs be awarded in favour of Gravity, Simons J considered the timing of THM’s concession of the proceedings, its conduct in the proceedings up to that point and the policy considerations behind the CCA 2013. Whilst the substantive issues were not argued before the Court, Simons J noted that the propriety of THM’s application to stay enforcement proceedings to arbitration would have been open for debate in a full hearing, in light of the wording of section 6(10) of the CCA 2013. The judge highlighted the importance and need for expedition in the enforcement of adjudicator’s decisions and held the delaying tactics of THM against them in the awarding of costs. This is a cautionary note for those who might seek to delay enforcement proceedings as part of defence tactics.

Whilst there was no full hearing on the legal issues in this case, this decision represents the first time the courts have enforced a decision under section 6(11) of the CCA 2013. Simons J’s support for the legislative intention behind the CCA 2013 is a boon for statutory adjudication in Ireland. Whilst every case will depend on its own facts, it is clear that attempts to cause delay in enforcement proceedings can be taken into account by the High Court in awarding costs. This should be considered a deterrent for those who wish to manipulate litigation in order to avoid paying on foot of an adjudicator’s decision and keeping a contractor out of its entitlements.

For further details on the case, see recent press coverage in the Irish Times - https://www.irishtimes.com/business/construction/adjudicators-decisions-in-building-contract-disputes-are-binding-court-1.4478420