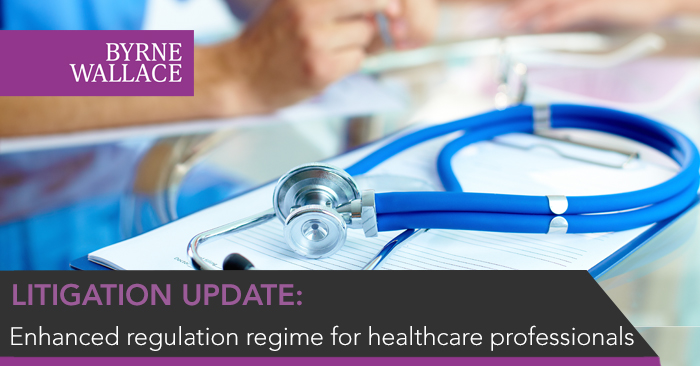 A new Bill recently passed by the Dáil will substantially update and modernise the regulatory framework applying to doctors, nurses, pharmacists, as well as a number of other health and social care professionals. [1]

The Bill affects the following regulatory bodies; the Medical Council, the Dental Council, the Pharmaceutical Society of Ireland, the Nursing and Midwifery Board of Ireland and CORU (the Health and Social Care Professionals Council). The Bill amends the legislation relevant to each of these bodies with the main focus being on fitness to practice procedures.

The provisions of the Bill are expected to be enacted in 2020.

It will now be mandatory for healthcare professionals to make an annual declaration to the relevant regulatory body, providing particulars of any disciplinary or judicial proceedings which are being brought against them, either in Ireland or in any other jurisdiction. Once a finding is made, the professional must also provide a declaration setting out any sanctions that were imposed, or if no sanctions were imposed a declaration to that state that to be the case.

The Bill also allows certain documentation relating to sanctions imposed in other jurisdictions to be used as evidence in Irish fitness to practice proceedings.

The relevant regulatory bodies will now be compelled to publish all sanctions imposed on the relevant professionals. Under the current law the regulatory bodies can do so if they believe it is in the public interest. This discretion is retained in relation to sanctions which have been imposed in another jurisdiction.

Under the current laws a complaint received by the Medical Council or Nursing and Midwifery Board of Ireland is referred to a preliminary proceedings committee who decide whether it is warranted to refer the complaint to the fitness to practice committee. The Bill provides that the CEO of regulatory bodies will now initially investigate complaints before referring them to the preliminary proceedings committee.

5. Role of the High Court

Where a decision is made to impose a minor sanction this decision must now be approved by the High Court. The Court must approve the decision unless ‘it sees a good reason not to do so.’ The decision of the High Court can only be appealed on a point of law.

The Bill aims to bring increased transparency with regard to sanctions imposed on relevant professionals which will be particularly important post Brexit. Concerns have been raised as to the publication of minor sanctions and its impact on the relevant professionals. It is expected that this aspect of the Bill will be revisited.

Regulatory bodies will need to ensure that they are adequately resourced due to the increased obligations envisaged under the new rules.