Is Ireland’s Freedom of Information Act facing an existential crisis 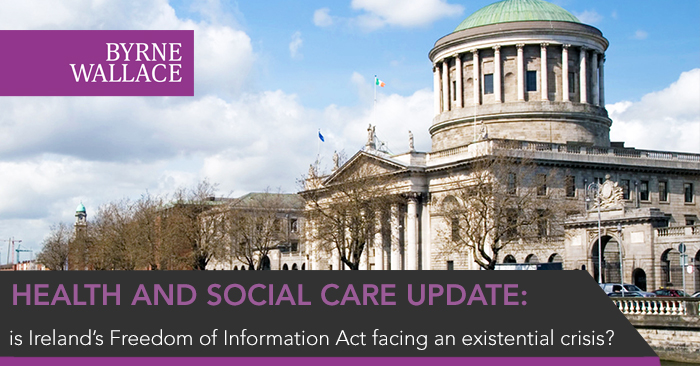 The Supreme Court is only seldom called upon to adjudicate on freedom of information (“FOI”) matters, so the spate of recent cases has attracted a great deal of interest, particularly from lawyers,FOI officers and journalists. Having given judgment in the recent Drogheda Review case on what it means to "hold" a record, the court's attention has now turned to commercially sensitive matters.

In Minister for Communications Energy and Natural Resources v. Information Commissioner & RTE, a journalist made an FOI request for details of a contract between a Minister and the telecommunications company, ENET. The Minister refused the request on the basis of section 35 (confidential information) and section 36 (commercially sensitive information) of the Freedom of Information Act 2014.

A review was sought by the Information Commissioner, who directed release of the documentation. The Minister appealed this first to the High Court, and then to the Court of Appeal. The Court of Appeal overturned the Commissioner’s decision, finding that the Commissioner erred in applying that a presumption in favour of access where section 36 applied. This presumption did not apply to records which fall within the statutory exemptions to access. The Court accepted that the information was commercially sensitive and it could be withheld on that basis.

Review of the decision was sought and the Information Commissioner concluded that the redacted information should be disclosed. UCC appealed this to the High Court, and Mr Justice Simons applied ENET and found that the Commissioner had erred in applying a presumption in favour of disclosure which UCC was obliged to rebut.

Brushing aside attempts to distinguish the ENET line of cases, the Court held that where a record comes within the terms of one of the statutory exemptions to disclosure, then the presumption in favour of disclosure does not apply. The Court also found that the Information Commissioner had applied too high a threshold to the commercially sensitive exemption.

The Supreme Court: “Who holds the cards?”

The decisions highlighted above led to a flurry of frantic headlines: “The Freedom of Information Act is dead”, and “Is Ireland’s Freedom of Information Act facing an existential crisis”. It was feared by some that the decisions would undermine the FOI regime in Ireland, in that public bodies would no longer have to explain their decisions not to disclose information. The arguing was not over, however, and both cases have now arrived at the Supreme Court.

Submissions have been made on behalf of the parties on the major issues: commercial sensitivity, when the presumption in favour of access applies, and where the public interest lies. A decision is eagerly awaited in the coming months.